This record reached in November 1899 by the Belgian Camille Jenatzy was held for three years, before […] 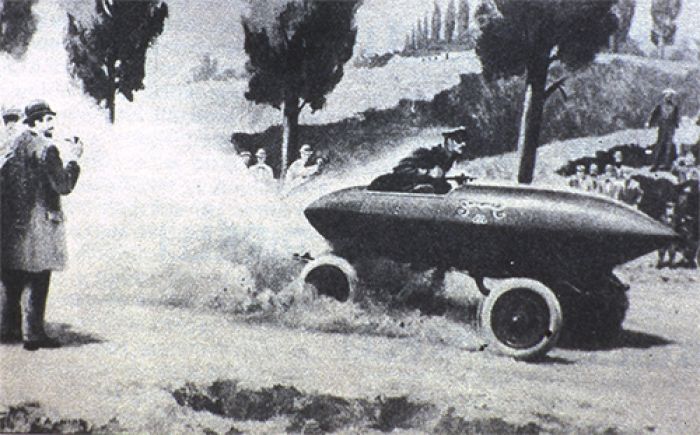 Share http://www.vchristianmanz.com
This record reached in November 1899 by the Belgian Camille Jenatzy was held for three years, before it was broken by another ecological car, a steam car. The gasoline car still took many months until it could compete with the other propulsions.

The doctors and the priests did not come to a clear conclusion of what could happen to the human body in a car exceeding the devilish speed of 100 km/h. Some of them thought that it was likely that one could lose its sight and the body fluids could harden themselves and thus the organs could explode. Other ones were totally convinced that God would send out thunder and lightning to those who dare to challenge him in this way. Thank God that both were wrong and nothing happened, even so the two characters involved of who will be the fastest man became afraid of their achievements and decided to not continue with their speed fight.

In 1895 the French Charles Jeantaud participated in the Paris-Bordeau-Paris race steering his electric car. In order to not lose time with battery recharge he was accompanied by a team that transported several recharge batteries as he had to change them 14 times. He triumphantly arrived in Paris, a goal which did not reach all the participants. Three years later, the Belgian Camille Jenatzy won with his electric car over all the rivals in the French circuit of Chanteloup leaving the gasoline car drivers amazed by beating them with a ten seconds’ advantage. A month later the count Chasseloup-Laubat honored himself as the fastest man by reaching with his Jeantaud electric car the speed of 63,158 km/h (flying kilometers). This event organized by the magazine “La France Automobile” took place in a park in Achères, a few kilometers north of Paris.

From this moment on, the Belgian Jenatzy and the French Chasseloup-Laubat started to beat each other in road race duels, always at the same place and with same conditions. Both wanted to be the fastest man in the world driving a car. One time, the count won who drove Jeantaud electric cars, the other time, won the Belgian with his own vehicles reaching every time higher speeds. They exceeded the limit of 70 km/h, 80 km/h when they realized that the electric motors reached their limit. They saw themselves obliged to look for other solutions in order to make their cars faster. Jeantaud opted for smoother sheet steel, covered the bottom of his car and developed a bodywork with an even frontal part and thus coming closer to aerodynamical concepts which later started to be fashioned. With a car prepared like this, the count reached the 93,724 km/h in March 1899. The duel seemed to be won. But Jenatzy sent from Belgium the notice that he will not give in.

In 1994 the Lion’s Club supported the Christian Wannyn’s initiative to create a copy of Janetzy’s car. The original had been kept in bad conditions without motors and tyres in the Palace of Compiegne. With the copy they planned to create an automobile which could participate in presentations and current races. Both Michelin in the sector of the pneumatics and Fulmen in batteries were original component providers. They dedicated themselves to develop the copy while the motors were provided by Leroy-Somer as the company Postel-Vinay providing the original motors has already disappeared.

Meanwhile, seeing that the original car was not restored and the owners did not want it to be used, and the access to the replica of Lion's Club is getting worser as the octogenarian owner retired, the belgian Xavier Van der Stappen, one of the most charismatic man in the sector of the Belgian ecomobility prepared a new replica. This replica is currently on the Belgian "Autoworld " Museum. According to Van der Stappen it has been reconstructed based on plans provided by an engineer of Compiegne Museum, where we can find the unrestored original car, so it can qualify as very authentic.

V. Christian Manz is writing a complete book about the more tha 130 years of evolution of the Electric Vehicle. He is still looking for an editor of this project.