Fascinating this rapid change of batteries in the Eucort Taxi in Barcelona in 1943, as shown by this […] 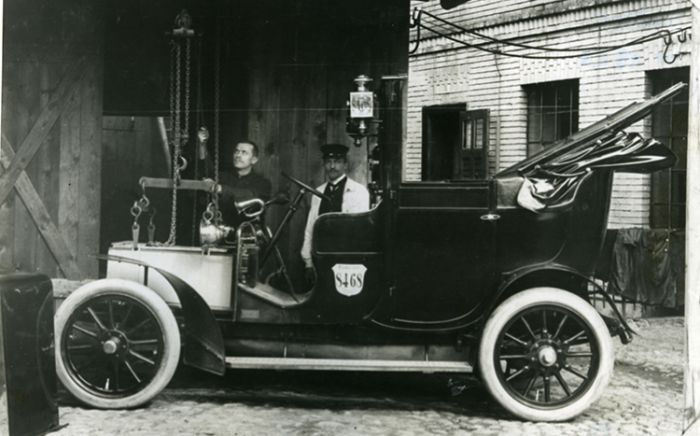 Share http://www.vchristianmanz.com
Fascinating this rapid change of batteries in the Eucort Taxi in Barcelona in 1943, as shown by this RTVE film. But they were not the first Spanish electric taxis between the civil war and postwar; and we also bring here two photos of a change of batteries back in 1906 - just as effective.

We started in 1906. Siemens-Schuckert Berlin decided to start producing electric vehicles as a diversification of its product range. They were based on the fact that the car of benzine did not fulfill the desired solution for the cities: it contaminated and produced a noise too high. In addition, it did not reach the relaxed and continuous driving of an electric car. Siemens developed its first electric car, a city car, with batteries arranged under the front hood, ready to be removed and replaced by charged batteries in a short time with the help of a pulley. The engine was located in the rear inside a ring that allowed it to turn in any direction accompanying the rear axle. Through a rigid axle with differential box, the power was transmitted to the rear wheels.

And we go to Spain of the mid thirties. Punished by the Civil War (1936-1939) and the consequent restriction of gasoline, several companies dedicated to transforme passenger cars and vans into electric cars. Several Spanish engineers transformed all types of vehicles into electric cars. The company Camilo Tinto of Barcelona was dedicated to manufacture different electric motors, many of them supplied to the company David, dedicated to transform Opel and Citroën in electric versions for their use like taxis. We know of at least a fleet of ten electric taxis David using Citroën body and mechanics. As the video of the RTVE shows, there was also a fleet of electric taxis of the ephemeral brand Eucort ... electric taxis are not an invention of today.

All this and much much more can be read soon in the book that V. Christian Manz will publish of the history of the electric-mobility. We will inform our readers of any new developments regarding this project, which is already becoming a reality.