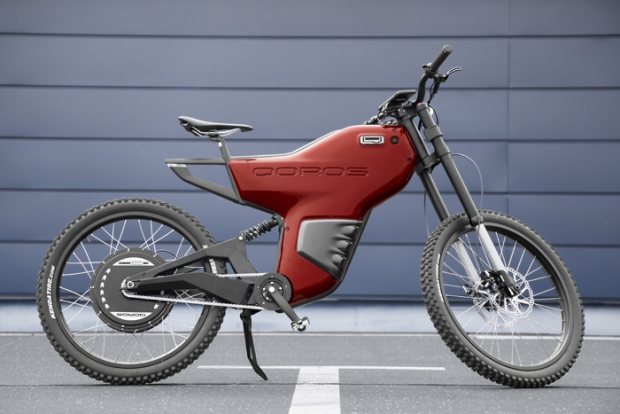 Share
The new chinese-israelian automotive brand Qoros presents at the Geneva Motor Show a concept of a futuristic mountain bike named eBiqe. Since they announced that this is only a prototype, is very posible that this new company will also offers electric bikes in the future.

Qoros, the new international car brand, is today staging the premiere of its eBIQE Concept at the 84th Geneva Motor Show. The eBIQE Concept is created for the modern metropolitan consumer, with exceptional performance that can be used for commuting, leisurely rides or exploratory off-road adventures. It is a concept of a cloud-connected electric bike and showcases numerous Qoros design cues carried over from its production cars, as well as innovative technology and impressive performance.

Riders can choose to pedal with no assistance, pedal with assistance from the electric motor, or go with motor-power only. When using the motor, users can choose between three driving modes: Street, which limits top speed to 25 km/h so it may avoid being legally classified as a motorcycle in some countries; Eco, which maximises energy-efficiency; and Power, which allows for faster acceleration and a top speed of 65 km/h. With 60 Nm of torque available throughout the rev range, on battery power alone, the eBIQE Concept in this mode can reach 25 km/h in an impressive two seconds. It has a charge time of just 80 minutes from any regular power outlet – perfect for the city dweller.

The connected technology used in the eBIQE Concept is based on the innovative QorosQloud platform (which is standard on most Qoros cars) and adapts its functionality for application to the electric bike to ensure it delivers highly relevant features and services for the rider. With a permanent 3G connection it is operated through an advanced five-inch touchscreen mounted on the handlebars (a downsized version of the eight-inch Qoros MMH™ screen seen on all Qoros cars), or in the cloud via the user’s smartphone, tablet, PC or Mac using the dedicated website (www.qorosqloud.com) or app.

The cloud-connected system will be able to offer many industry-leading functions, such as advanced route planning, intelligent navigation, the ability to remotely check the eBIQE Concept’s condition (tyre pressures, battery charge and range), and networking capabilities through social media, with the ability to share favourite routes and points of interest or arrange impromptu meet-ups with fellow riders.

Similar to the system already available in Qoros’ cars, thanks to its permanent 3G connection, QorosQloud will provide navigation that incorporates real-time updates for incidents, travel times, weather and charging points. And its cloud connectivity means that the system’s enhanced mapping data is especially valuable when riders head off-road. With a satellite overlay map view it could display topographical information so he or she can make better informed decisions about what direction to take. Alternatively because QorosQloud synchronises with the user’s smartphone, tablet or computer, rides can be planned ahead from inside the home or office.

“The intent is to adapt the QorosQloud platform that is already being enjoyed by drivers of our cars so that it would deliver the same level of powerful functionality, convenience and social networking services to enhance the eBIQE Concept rider’s experience,” explains Stefano Villanti, Executive Director of Sales and Marketing at Qoros. “Even the Eco-drive monitoring service that helps Qoros drivers to increase their driving efficiency is considered in the eBIQE Concept, with the ride behaviour analysis feature conceptually developed to enable users to assess their riding style.

“QorosQloud can allow riders of the eBIQE Concept to integrate like never before with the physical and digital world while making their lives easier and more enjoyable,” concludes Villanti.

The eBIQE Concept features a fingerprint recognition system, with the ability to recognise multiple users. This, in conjunction with geolocation technology, could make the eBIQE Concept highly suitable for integration into vehicle sharing schemes. Another stand-out feature is regenerative braking. A rarity on electric bikes, it enables the electric motor to generate electricity while slowing down, with this energy fed back into the battery pack increasing efficiency and range.

Although the surface area and exterior features were quite limited compared to the relatively expansive body of a car, the design team ensured that the eBIQE Concept successfully incorporates Qoros’ design DNA. The body is hand-laminated carbon-fibre, based on the steel frame of the G12 electric bike from Greyp. The team applied clean horizontal lines, a forward-leaning wedge profile and a hockey stick-shaped spoiler– all typical Qoros design traits.

Gert Hildebrand, Executive Director of Design at Qoros, said: “We designed the eBIQE Concept with our modern metropolitan customers in mind. It embodies some of our key philosophies - simple and elegant design, cutting-edge technology and the desire to make our customers lives easier and more enjoyable. As with our cars we delivered all this while creating a product with uncompromising standards of high quality.

“There are over 130 million e-bikes in China, where several major cities have already restricted the use of gasoline motorbikes or have banned them completely. Chinese e-bikes are primarily used for commuting, but the Qoros eBIQE Concept was conceived to go further – it performs superbly as a commuter and is fun and highly-capable in an off-road situation as well.”

Suitable for commuting and for leisure rides, the Qoros eBIQE Concept combines the best of both worlds, and just like the brand’s road cars it has a unique combination of attributes to enhance the lives of modern, metropolitan customers.