Demonstrating innovation and excitement in every component, the Nissan BladeGlider made its European […] 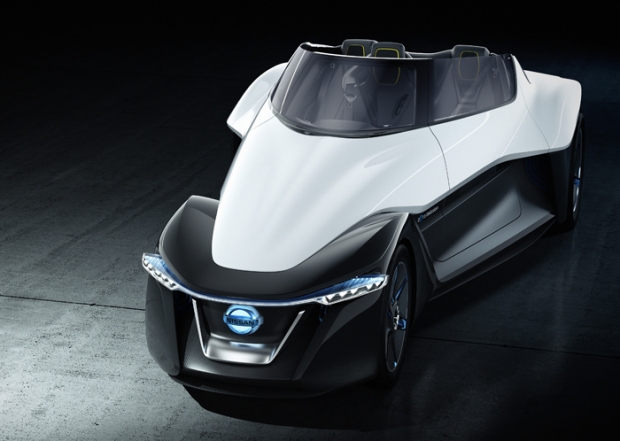 Share
Demonstrating innovation and excitement in every component, the Nissan BladeGlider made its European debut at the 2014 Geneva Motor Show. Nissan's latest sports concept will challenge conventional thinking on sports car performance handling, braking and weight distribution. The Nissan BladeGlider features a radical front narrow track layout, where the front is significantly narrower than the rear, creating a swept-wing profile when seen from directly above the vehicle.

First unveiled at the Tokyo Motor Show, Japan, in November 2013, this technology follows in the footsteps of Nissan's ZEOD RC Zero Emission on Demand racecar (ZEOD RC), which will participate at next year's Le Mans "Garage 56" event with the narrow front-track design. Director of Nissan Motorsport Innovation, Ben Bowlby, the designer of the ZEOD RC, also consulted during the development of the BladeGlider.

"When you see the narrow front track layout for the first time, everyone is skeptical on how the car will handle," said Bowlby." The concept has proved itself on the race track running as fast as the overall contenders. And I'm sure the BladeGlider will meet with the same initial skepticism, but we know, after extensive testing on the racetrack with race drivers behind the wheel, the Nissan BladeGlider has the potential to be the best handling production car in the world."

The weight distribution of the BladeGlider makes it ideal for quick, efficient launches from a standstill and intense acceleration once off the line. The primary reason for this is that the rear tires are considerably wider than the front tires, resulting in more traction at the rear, enabling the tires to get a better grip on the driving surface. Also, the wide rear track allows for virtually all of the car's heavier components-including the two in-board motors, lithium ion batteries and passengers-to sit between the rear tires; hence, most of the cars' weight (70 percent in this case) sits directly on the two driven wheels. Therefore, when the power is sent to the rear wheels, the mid-engine/rear-drive BladeGlider exhibits very little tire slip, allowing the 285/35 tires to bite into the driving surface and launch the car in a highly efficient manner.

Thanks to the BladeGlider's extremely narrow front end, which includes the skinny 100/80 tires, air drag is minimal. The BladeGlider features one of the lowest Cds ever for a concept road car, allowing the car to "glide" to speed with little air resistance.

Another benefit to the car's narrow front end is weight. Thanks to less hardware and smaller components, the BladeGlider's overall curb weight is considerably less than that of a similar size car with a conventional front end.

The most impressive, and most remarkable, advantage the BladeGlider has over its conventional counterparts is handling. While traditional performance enthusiast may scratch their respective heads wondering how a car with such a narrow front track can take corners; the answer is relatively simple. The narrow front track of the BladeGlider allows less weight to be placed on the front wheels. While some say that more weight on the front tires equals better grip, the complete opposite is actually true. Sure, with super wide tires, extra load may result in more grip, but this is not an efficient solution, nor is it always true. For example, front-heavy cars are prone to excessive understeer - the loss of grip at the front wheels, where the car does not turn as much as the steering demands. The thinner tires up front allow the BladeGlider to turn in crisply because only 30 percent of the car's total weight rests upon them. An added benefit is improved steering in terms of effort, feel and precision.

Also, the narrow front track allows the car to have minimal lateral weight transfer through corners, at both the front and rear ends. Cars with wider front tracks dramatically shift their weight to the outside tire when turning, leaving the inside tire to do virtually nothing. Thus, only one tire is steering the car through a corner; but with the BladeGlider, both tires stay in good contact with the road surface and share nearly the same cornering load, virtually working as one unit. And thanks to the independent suspension system, each tire's effectiveness is augmented through turns.

The wide rear track and wide rear tires also contribute to the BladeGlider's exceptional handling. By providing a stable and rigid foundation for the car, they allow the car's front tires to effectively point the nose of the vehicle in the right direction. Think of a sledge hammer and its handle. Put the hammer on the ground and move the handle in the desired direction. It can be done with relatively little effort because the head of the hammer is providing a stable foundation. This unique effect of the BladeGlider can be enhanced with torque vectoring (or an enhanced limited slip differential) that can be programmed into the in-wheel motors, allowing the rear tires to help point the car's nose.

Unlike conventional road vehicles, the rear brakes of the BladeGlider do more work than the front brakes when slowing the car down; therefore, they are larger and more powerful than the front brakes (the opposite is true in all other road cars). This provides a tremendous advantage when braking from high speed, as the wider tires, which have most of the car's weight on them, provide excellent traction when decelerating. With the rear tires doing most of the work during acceleration and braking, and the front tires providing grip through turns, the overall performance workload at the four points of contact is distributed ideally: the front tires steer the car, the rear tires propel and stop the car.

With the driver sitting in the middle of the cockpit and near the rear wheels, the BladeGlider's chassis relays clear and immediate feedback to the driver. Therefore, when the car's front or rear tires lose grip, the chassis lets you know immediately, giving the driver ample time to correct car's trajectory.

Another added benefit is tire wear, or lack thereof. Each rear tire and each front tire are doing an equal amount of work (as noted above), so their wear rate is also equal. Conventional cars frequently suffer from uneven tire wear, but the BladeGlider won't require a tire change as often as a conventional car, especially when subjected to aggressive, spirited driving.