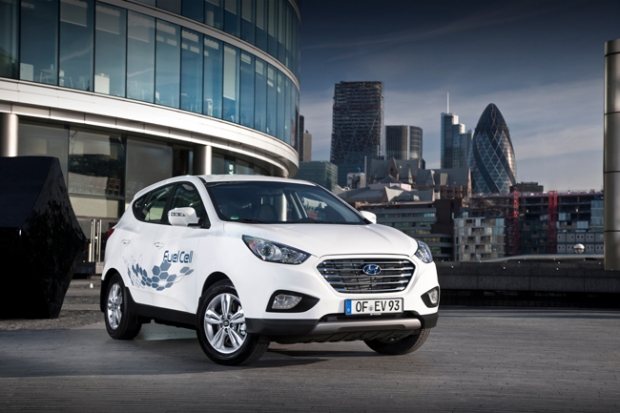 Share
A pioneering £31 million deal is struck to make hydrogen vehicles a viable and environmentally friendly choice for motorists across Europe.

Leading motor manufacturers, hydrogen fuel suppliers, the Mayor of London’s Office and energy consultancies from around the globe are signing up to the HyFive project, the largest of its kind in Europe, at City Hall in London on April 3rd. Five different manufacturers have agreed to deploy a total of 110 hydrogen fuel cell vehicles at several European locations (Bolzano, Copenhagen, Innsbruck, London, Munich, Stuttgart) and develop new clusters of hydrogen refuelling stations.

Locations are being sought for three new hydrogen refuelling stations in London, one in Aarhus and in Odense (Denmark) and one in Innsbruck (Austria). They are expected to be operational by 2015, by which time some of the manufacturers in the partnership will have started to put hydrogen fuelled cars on sale in some European markets. Using hydrogen gas as a fuel to generate electric power the revolutionary vehicles produce no harmful tailpipe emissions – only water vapour. They have the potential to be more than twice as fuel-efficient as conventionally powered vehicles and operate very quietly.

The Mayor of London’s Office is coordinating the multi million pound project, which has been signed up to by BMW, Daimler, Honda, Hyundai, Toyota and hydrogen fuel companies including Air Products, Copenhagen Hydrogen Network, ITM Power, Linde, OMV. Other signatories include Element Energy, PE INTERNATIONAL, the Institute for Innovative Technology and the European Fuel Cell and Hydrogen Joint Undertaking.

Hydrogen infrastructure will be built across several countries as part of this European project. Filling stations will be built and operated in Denmark, Sweden, Germany, Austria and Italy, as well as in London. An advantage for the new technology is that these stations will share internationally agreed fuel and re-fuelling standards. All of the partners in the project see the initial investment to build small clusters of stations as key to gaining the research knowledge that will demonstrate the viability of hydrogen fuelled vehicles.