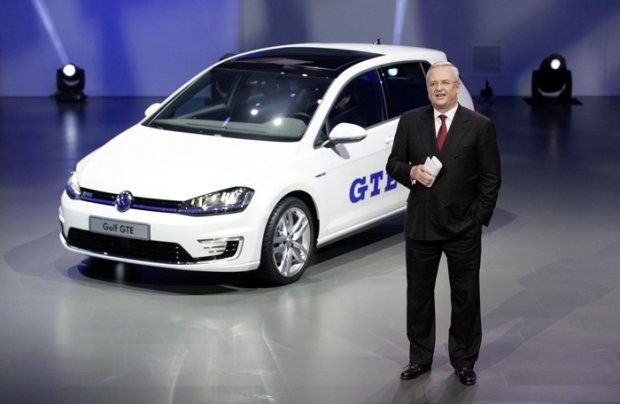 Share
“The Volkswagen Group is once again assuming a pioneering role in China and launching the biggest initiative for e-mobility in China’s automotive history,” Prof. Dr. Martin Winterkorn, CEO of Volkswagen Aktiengesellschaft, announced at the Auto China motor show in Beijing. The initiative gets underway with the launch this year of the Volkswagen brand’s electric up!1 and e-Golf2 models.

While the Porsche Panamera S E-hybrid3 is already in the showrooms in China, the Group will be launching two further innovative plug-in hybrid vehicles there next year with the Audi A3 e-tron4 and the Golf GTE5. Starting in 2016, this will be followed by two models developed specially for the Chinese market: These are the Audi A6 and a new mid-size limousine from the Volkswagen brand, both plug-in hybrids which are being developed together with the joint venture partners FAW Volkswagen and Shanghai Volkswagen and will be produced locally. Furthermore, the Bentley Hybrid Concept opens a window on the broad-ranging potential of hybrid technology.

Winterkorn went on to say. “All these vehicles are highly efficient and eco-friendly. And at the same time they offer lots of driving pleasure. That is exactly what people all over the world and here in China expect of the Volkswagen Group. Thanks to the modular strategy, which is also being implemented at our Chinese factories, we can electrify nearly every model in our range: From small cars to large sedans, from pure electric drives to plug-in hybrids.”

As a result, the Volkswagen Group is making its Chinese vehicle fleet ever more efficient. Seventeen Group models already meet the updated legal requirements set by the Chinese authorities to qualify as ‘especially energy-efficient vehicles’. “Here in China, we are now setting out on the road to a future of emission-free mobility,” Winterkorn added.

To that end, the two joint venture partners FAW Volkswagen and Shanghai Volkswagen are investing more than ever before in state-of-the-art vehicles and drives, green technologies and resource-efficient plants. €18.2 billion will be invested up to 2018. As Winterkorn commented: “Our team of over 2,700 engineers in China and our partners are working together on pioneering technologies, and we are banking on China’s innovative power.” The company will continue on its growth trajectory. Over the coming years, more than 20,000 new skilled jobs will be created in China alone.

Winterkorn also said that “China is the Volkswagen Group’s largest single market and plays a key role in our Strategy 2018. For 2014, we have once again set our sights on double-digit growth in China and are aiming to deliver over 3.5 million vehicles to customers for the first time in a calendar year.” According to Winterkorn, the Group is also making good overall progress across all markets: “This year, our Group is aiming to deliver over ten million vehicles to customers worldwide for the first time.” That would mean the quantitative target of Strategy 2018 would have been achieved four years earlier than planned.