The Irizar i2e is a city bus that has been fully developed with proprietary technology, the result […] 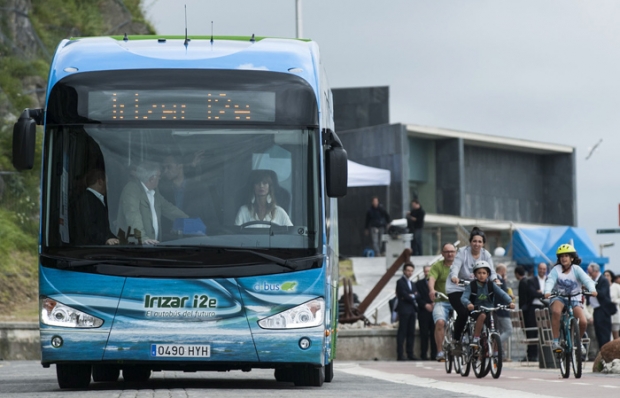 Share
The Irizar i2e is a city bus that has been fully developed with proprietary technology, the result of joint efforts between the Group's companies and the technological centres of the Basque Technology Network, companies such as Hispacold, a manufacturer of heating and air conditioning systems, Jema, specialised in electronics, Datik, a technology company that develops smart solutions for the transport sector, Masats, which manufactures accessibility systems and CREATIO, the Group's R&D centre.

The Irizar i2e offers maximum profitability in terms of its electrical consumption by including the latest energy technologies. With a nominal power of 230 k", the energy aboard the vehicle is 376 kWh, which provides a range between 200 and 250 km, depending on the driving cycle and weather conditions. With this range the bus will release a single charge at the end of the day. Just five hours of charging guarantee 14 to 16 hours of driving in dense city and intercity traffic conditions, with an average speed of 17km/h.

In order to optimise consumption, it includes technologies such as pre-climate control, which allows the vehicle to depart from the bus depot at an optimal temperature by making the most of the energy from the power grid and reducing consumption, as well as Eco Assist, a system that helps the driver in real time with the aim of reducing the vehicle's energy consumption and increasing its range.

The energy storage management system, developed by Jema Energy, manages the relation between the battery and the super condensers to maintain the charge status of both components within an optimal range as well as to extend the useful life of the various components, resulting in improved operating costs.

The batteries of the Irizar i2e have operated as power systems for ten years and they are 99% recyclable. They represent a proven and reliable technology. The battery charger has a combo2-type hose, and it allows fully charging the batteries in five hours.

Another feature is the recyclability of its components. It has been developed according to the principles of ecodesign, applying environmental criteria to the design of the bus. Its batteries are also 99% recyclable.

The group estimates a total planned investment of €60 million for the development of the electric bus and its production facilities. The new production plant will be finished in 2016, and the demand for units prior to this date will be handled by existing facilities.

The objective of this innovative project is to develop high-capacity electric vehicles and to create the corresponding infrastructures for recharging so as to implement a fully electric solution in most European city bus networks.
Using electricity as an alternative fuel for road transport helps reduce atmospheric contamination, greenhouse gas emissions and acoustic contamination.

The project is co-funded by the European Commission (DG Mobility and Transport) and led by the International Association for Public Transport (UITP), which coordinates the 40 partners, including Irizar, and represents all the categories of the entities involved in mobility.

The project, with a 42-month duration, will focus on showing the economic, operational, environmental and social viability of electric buses as a real alternative for mobility in urban environments based on various innovative technological solutions in eight European cities: Barcelona, London, Glasgow, Stockholm, Münster, Pilsen, Bonn and Cagliari, different weather and orographic environments. San Sebastian is an observation city for this programme.

The i2e is the result of the group's strategic focus on innovation in the area of sustainable mobility. Circulating fuel vehicles are the cause of 40% of CO2 emissions and 70% of other contaminants. Each electric bus reduces annual CO2 emissions by 88 tons and saves 33,000 litres of fuel. There are also increasing levels of acoustic contamination, and today, more than ever, we need efficient means of transportation that are ecological, silent, environmentally friendly, and help improve the quality of life of people in cities.