The International Bus and Coach Trade Fair, taken place between 28 and 31 October 2014 in Madrid, is […] 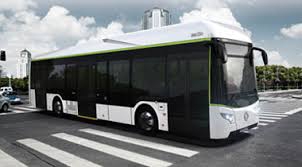 Share
The International Bus and Coach Trade Fair, taken place between 28 and 31 October 2014 in Madrid, is the place of presentation of a new brand for buses and coaches, the working-together between the Spanish welknown coachbuilder Castrosua and CAF Power & Automation. With the Vectia boach companies pretend to create a new business model based on the electromobility, launching hybrid buses and preparring electric buses for the future.

Born as a new Spanish brand, but with over 60 years experience in transportation, that first offer of Vectia is the new Tempus Castrosua, a model prepared for the hybrid drive, and already ready for commercialization, with a more powerful electric motor than the previous version. This hybrid model remains either diesel-electric or CNG-electric (there is also a version for LPG).

Also under the new brand Vectia they like to offer specific models of the platform from the Castrosua Veris, a 12 meters long city bus with 2.55 meters wide, which allows different engines. For the future Vectia aims to develop 100% electric buses, as it believes that the market for city buses is in flux, both nationally and internationally.

The Tempus model, considered the first hybrid bus developed and produced entirely in Spain, did evolve to more compact models, all to offer a range of different lengths and engines.

With these modern models already in production or in development Vectia also wants to export their products, as the Tempus hybrid model has attracted much attention in other markets. Castrosua believes that the union between the two companies, specifically in the field of environmental freindly future vehicles, may allow a lot of international sales.