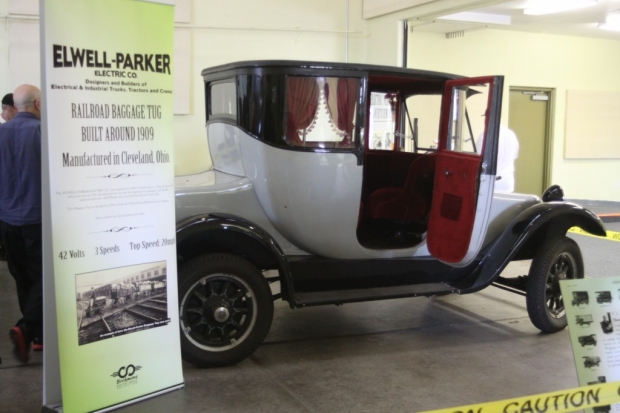 Share http://www.hevf.org
The Historic Electric Vehicle Foundation (HEVF) opened it’s first International Electric Vehicle Museum in Kingman, Arizona on August 15th, 2014 in conjunction with the Route 66 International Festival being held there. The theme for this year's festival was 'The Crossroads of the Past and the Future'. At the three day opening, the museum was visited by people from 28 states and 20 countries making it a truly international event. The name chosen for HEVF’s very first electric vehicle (EV) museum - the only one in the world solely dedicated to electric vehicles, was the 'Route 66 Electric Vehicle Museum'.

It all started out as a commitment by the HEVF to bring a couple of EVs to display in support of Route 66 becoming an 'Electric Highway' with charging stations installed along it’s entire route. This snowballed into the HEVF’s very first museum location. The site chosen by the City of Kingman was the historic Powerhouse Building, constructed in 1907 and fitted with oil-fired, steam-driven generators to provide electricity to the area. It couldn't have been a better match! The construction of the Hoover Dam displaced the Power House's role, and having survived attempts to demolish the structure in the 70s it currently houses the Kingman Visitor Center and the award winning Route 66 Museum on the second floor.

To make this all come together, HEVF’s Executive Director, Roderick Wilde, worked with renowned Kingman resident and author Jim Hinckley and Kingman’s City Manager, John Dougherty. “The city was most welcoming and all the people we met there were great!”, exclaimed Roderick. Jim Dougherty said the EV display was an exciting addition to the Powerhouse complex and that the city looks forward to further cooperation with the HEVF. Josh Nobel, Executive Director of Tourism, for Kingman stated: “The Route 66 Festival provided a suitable platform for the historic electric vehicle symposium, but it became evident the display was solid on it's own.”

There was a very wide range of vehicles displayed from 1909 to the present, the oldest being a 1909 Ellwell-Parker baggage tug owned by Bob Oldfather, HEVFs Archivist. This is only one of two known to exist in the world. The newest EV was a sleek Tesla Model S graciously displayed during the opening day by its owner, Tudor Melville. John Wayland, another HEVF board member, brought his famous street legal electric drag car, “The White Zombie” all the way from Portland, Oregon. Also on display was the world’s first electric street rod, built by Wilde Evolutions in Jerome, Arizona back in 1995. Roderick Wilde brought his 1930 Detroit Electric and several US made electric micro cars which were built in California in the 1940s to 1960s.

Earlier this year, one of these micro cars was on display at the Petersen Automotive Museum in Los Angeles, and was also at the Californian Automobile Museum in Sacramento. Another vehicle of note was the late Ed Rannberg’s high performance electric drag bike, the “Kawashocki”. Ed was one of the pioneers in the EV movement in the US. He is honored by the National Electric Drag Racing Association, www.nedra.com, which has a yearly award, “The Rannberg Cup” in recognition of those who have done great things to promote EV awareness. Kawashocki was brought out from Oklahoma City and was donated to HEVF by Geri Rannberg, Ed’s wife, and his son Randy.

The Power House is the HEVF's first venue and it will hopefully live on just as Route 66 itself has, as a true crossroads of the past and the future. The HEVF plans to add several new vehicles to the Kingman display in the coming months, including a 1912 CT electric commercial truck from Bob Oldfather’s extensive collection. You have may have heard of duallys, but this serious electric truck has triple-wide solid rubber tires front and rear mounted on wooden spoke wheels. The driver sits ten feet in the air in the cab... it's a real monster! Also coming in October will be our newest acquisition, a 'Bombardier' preproduction neighborhood electric vehicle (NEV) which the Canadian company used in lobbying activities to get the US federal government to enact NEV legislation that we now enjoy today. This vehicle is being donated to the foundation by Skip Dunn, the President of the Northern New Mexico Electric Vehicle Association.

There are EVs on display at car museums around the world, but they are rarely a focal point and given the attention they deserve. The HEVF exists to give EVs their own place in history, and as it moves forward with acquisitions the depth and breadth of the collection will grow.