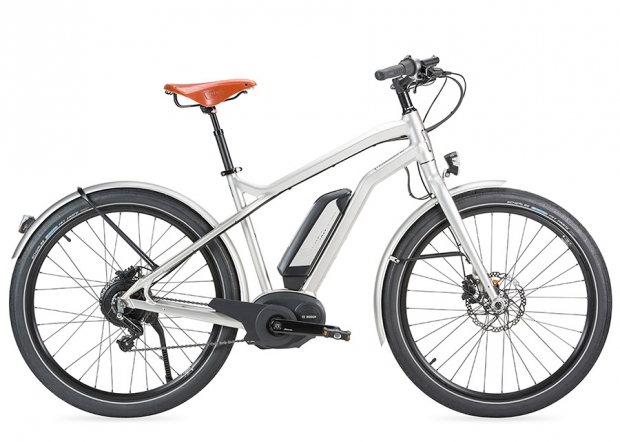 Moustache, eBikes with quality for everyone

All the bikes have a special handlebar. Invented by Moustache´s ancestors, they have updated it and given it a new, unique design. This design has an essential function: it offers a natural riding position for improved comfort. Moustache developed four different variations, each with small angle differences, until they found the perfect shape. Like the frames, it’s made from 6061 alloy, and it also gets the same thermal treatments for maximum resistance.

Their frames use an aluminum alloy with aeronautical qualities, the tubes are hydroformed! The special technology uses high-pressure water that is pumped into the tube while it is in the mold, so it takes the exact form of the mold. This manufacturing process allows for a greater control of the form and thickness of the tubes, for optimal quality and performance. The most spectacular tube is without a doubt the top tube, which is made using only one piece of tubing. We spent weeks optimizing its shape to make it perfect.

Unlike traditional frames, the Friday and Samedi top tube is directly connected to the seatstays, which support the rear wheel. This creates a more compact and laterally stiff rear triangle, while dispersing vibrations to the specially-formed top tube instead of towards the saddle.

The other masterpiece is the Bosch motor interface, specially designed by Moustache. Made using CNC manufacturing technology, it was created to fit the Bosch motor with total precision and to maximize the stiffness of the frame. It’s the heart of the frame! One last detail… To avoid weakening the structure, the frame does not have holes to integrate the cables. Rather, we’ve added a protective covering, which also makes maintenance easier.

Moustache bike use Bosch motor. The speed at which it rotates is linked to pedaling cadence, so if the rider changes gears wisely, the motor is in its optimum output range most of the time, which is what gives it an incredible average efficiency score of 80%. It’s also the reason why the autonomy of the system is so high without needing an oversized battery, and what allows users to easily ride 20% grade climbs!

Another huge advantage: the wheels are exactly the same as those used on a standard bike, so they are easy to remove (unlike a wheel that has a motor in the hub). There’s no cable to disconnect and no sensor to readjust...
Some of the characteristics and qualities:
-    Central motor weighs less than 4kg
-    Pedaling energy transferred to the wheel, optimizing the gear-changing system to obtain a high level of autonomy and cruising range
-    High maximum torque: 50N for the crank (= approximately 30kg extra effort on the pedal)
-    Legal nominal power of 250W or 350W (45km/h for certain Swiss models)
-     Automobile technology, reliability, and optimum performance
-    Low center of gravity for better stability
-    Compact, tough, and water-resistant (IP54 rating, do not use high-pressure washers), with protective casing to shield from stones and debris
-    3 integrated sensors (effort, rotations, speed)
-    Data analyzed 200 times per second
-    Integrated controller