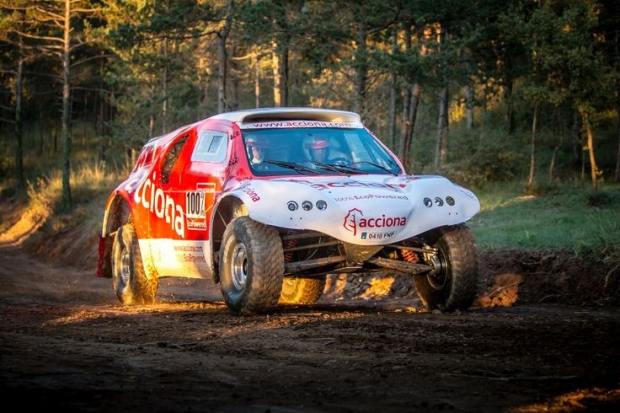 Share http://www.accionadakar.com
ACCIONA, the Spanish infrastructure, water, services and renewable energies multinational company, presents ACCIONA 100% EcoPowered, the first electric car powered exclusively by clean energy, up for the challenge of the toughest engine competition in the world: the Dakar Rally.

It will be the first time in its 37-year history that Dakar registers a 100% electric car. Dakar is considered the toughest test in the world for a car, with a distance of over 9,000 km and where the average consumption expenditure per participant is 2,250 litres of fuel; and ACCIONA 100% EcoPowered will not emit a single CO2 particle. In 2015 the race takes place between the 4th and 17th of January in Argentina, Bolivia and Chile,

Developing ACCIONA 100% EcoPowered has taken more than two years of R&D and has counted on the collaboration of a multidisciplinary team of over 20 people. The purpose was to reach an optimal balance between electric propulsion technology, powered entirely by batteries, and the unique characteristics of a racing car prepared for an extreme adventure such as the Dakar.

The car's 100% clean energy system has a highly efficient synchronous electric engine equivalent to 300 CV and which weighs only 80 Kg compared to its internal combustion counterparts which weigh 280 Kg, a set of 4 removable Lithium Ion battery packs, capable of storing a total of 140kWH (similar to the contracted capacity of 32 homes) to adequately power the electric motor and a system of high-efficiency solar panels, ensuring the supply of 100% renewable energy to power telemetry and security systems of the ACCIONA 100% EcoPowered.

To participate in this tough rally, the electric vehicle requires a charging infrastructure. Their pilots in the adventure, Albert Bosch and Agustin Paya, estimate that the car can go over 200 kilometers without refueling. To recharge they will use several systems, a mobile system for deserts, the normal current in the houses, but especially they prepare a rapid change of the four removable batteries of 35 kW, installing new ones to continue the route and recharge the other as and how they can. This will be an experience.

With this electric car, ACCIONA completes its trilogy of 100% EcoPowered vehicles that began in 2011 with its sled that reached the South Pole propelled only by a system of kites and continued its march forward in 2012 by participating in the Vendeé Globe, on board a sailboat that completed a solo, non-stop, round the world trip, without using a drop of fossil fuel.