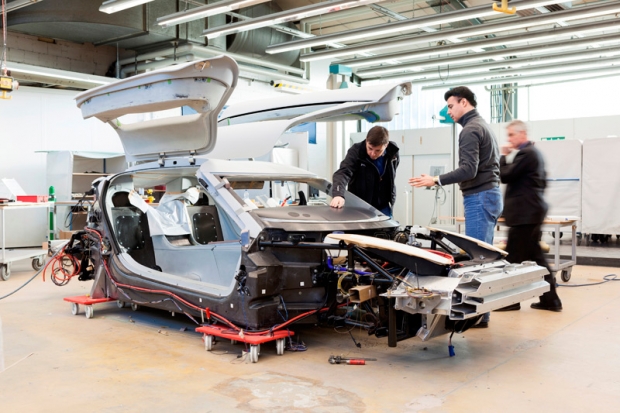 Share
nanoFlowcell AG is working with its partners on further advancing the QUANT e-Sportlimousine with nanoFlowcell®, with over 100 R&D professionals working on the project. The aim is to get approval for its series production in Europe and the USA. Car fans can start looking forward to the new 2015 version of the QUANT with nanoFlowcell® drive configuration at the 2015 Geneva Motor Show.

Nunzio La Vecchia announced the founding of nanoProduction GmbH, headquartered in Waldshut in the German State of Baden-Wuerttemberg; a company responsible for all aspects of manufacturing technology for nanoFlowcell AG Group. With this, another step has been taken towards meeting all the requirements necessary for nanoFlowcell AG to operate as a series-production car manufacturer in the future. nanoProduction GmbH will conduct all negotiations on behalf of the Group with suppliers and development partners for all matters relating to manufacturing technology, and will put in place the operational steps as well as the formalities required for homologation.

“At the 2015 Geneva Motor Show in March visitors will already be able to see ample evidence of the dynamic and systematic way in which nanoFlowcell AG works to carry out its technical and developmental functions. We are an innovative R&D company pushing the absolute limits of what is possible in electromobility. We are pioneers exploring new paths no one has embarked on before. And we intend to leave our own, unique mark,” said Nunzio La Vecchia in anticipation of the innovations to be exhibited by nanoFlowcell AG in Geneva in March 2015.

"We are making excellent progress. By the time the Geneva Motor Show 2015 starts we will already have met 90% of the homologation factors required for series production. The exterior already meets all the requirements for series production. The points still to be covered comprise mainly the upcoming and very costly crash tests as well as formal tests and documentation. The crash tests will be carried out both in the USA and in Germany. Although it pains me to think of subjecting such an exciting car to a crash test," said Nunzio La Vecchia, Chief Technical Officer of nanoFlowcell AG.

"In many of our R&D activities we frequently hit boundaries which we have to overcome. For example, the enormous energy potential of the nanoFlowcell® and its link with innovative storage technology, the so-called buffer system, presents a technical challenge which vehicle and engine manufacturing has never had to face before. We have mastered this challenge. And we have done so with the best experts and specialists in this area in Germany. It is my belief that, when it comes to development, none of the large automotive manufacturers can work as flexibly and as fast as we can. That is what makes us so potent, and also so fast. I can promise you today – and I am being totally non-judgemental here – that what we will be presenting at the 2015 Geneva Motor Show will open up completely new dimensions for the electromobility of the future,” stated Nunzio La Vecchia confidently.

"Many of the parts in the new QUANT F are not yet available anywhere in the world. They had to be developed in-house, which meant planning, testing and producing them from scratch. All of which takes time. Which is why we are so proud to be able to present the new QUANT F in Geneva in spring,” said La Vecchia.