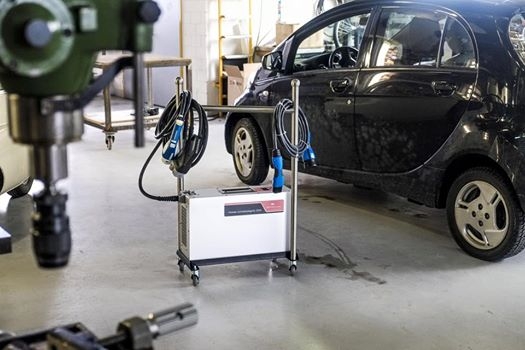 Share http://www.design-werk.ch
The Swiss company Designwerk offers a mobile fast-charger to be used in hard-running electric events as it turns any charging station into a DC charger allowing to charge at up to 22 kW.

Nissan supplied a total of 100 electric vehicle shuttles during the UEFA Champions League finale in Berlin on the first weekend of June. In order to charge the cars during this hard-running event, Nissan employed a total of twelve mobile fast-chargers MDC22 by Swiss company Designwerk, based in Fehraltorf.

With the kickoff of the 2014/2015 season, Nissan is the official sponsor of the UEFA Champions League and UEFA Super Cups for the next four years. For this year’s finale onJune 6th in Berlin, the carmaker provided 100 all-electric Nissan Leaf and e-NV200 for the shuttle service. With help from Switzerland and in addition to the existing fast-charging infrastructure in the German capital, the Japanese company was able to make sure that its electric vehicles were read-to- use at all times.

The mobile fast-charger called MDC22 turns any charging station into a DC charger, allowing vehicles to charge quicker at up to 22 kW almost anywhere. The device can be connected to any Type 2 charging station or CEE standard industrial type socket, completely charging a Nissan Leaf or e-NV200 in under 90 minutes.

Weighing a mere 22.5 kilograms and measuring only 620 x 370 x 195 mm makes the MD22 from Designwerk portable and easy to handle. It can even be fitted with wheels. Thanks to its mobile usability, the MDC22 is perfect for fleet use, workshops and events. During the Champions League finale, for instance, the mobile chargers were used at partner hotels, where CEE industrial type sockets are standard.

The MDC22 is multi-system compatible and is available with CHAdeMO, as well as CCS Type 2 cable. The device’s high efficiency of at least 94 percent is outstanding and a clear advantage when compared to similar products from competitors. This was especially important to Nissan, since high efficiency rate means reduced charging or downtime of the vehicles.

Designwerk brings together industrial design and engineering. The “Denkfabrik der Elektromobilität” – the think-tank of electric mobility – now has a number of successful projects behind it. Its most important innovations include Swiss Post’s Kyburz DXP electric three-wheeler, the ultra-efficient Zerotracer fully-enclosed electric motorbike and Switzerland’s first fully electric 18-tonne truck which has been in regular use by customers such as Coop, Feldschlösschen, Lidl, Planzer and Rewe.