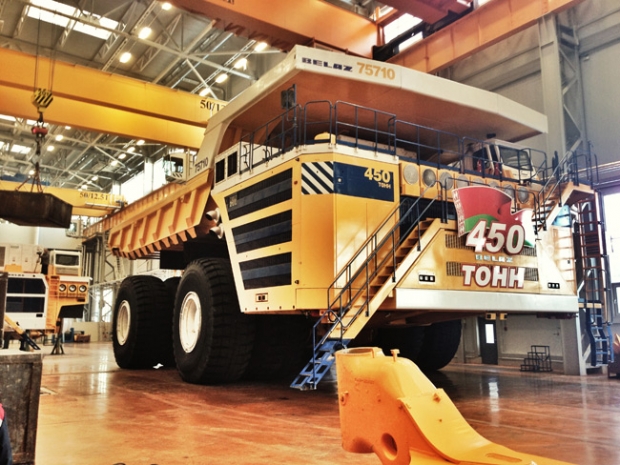 Share
Guinness World Records crowned the truck BelAZ-75710 as the world´s largest two-axle dumper truck. One of these gigantic vehicles is able to transport more than 450 metric tons of material — that´s equivalent to seven fully fueled and loaded Airbus A320-200 planes. The truck is driven by four 1,200 kW electric motors from Siemens.

The system uses two 16-cylinder diesel engines, each with an output of around 1,700 kW. Together they provide the energy that the electric drive requires in order to propel the giant tires. The traction motors for the electric gear were manufactured at Siemens in Nuremberg, Germany. The project was completed in a comparatively short term: the development process from ordering to commissioning took less than two years. The truck is over 20 meters long, almost ten meters wide, and around eight meters tall. It has a turning radius of approximately 20 meters and a top speed of 64 km/h. Its all-wheel drive and four-wheel hydraulic steering ensure that the tires, which are around four meters tall, don´t get stuck in rough terrain. The truck is being used primarily to transport coal and iron ore-bearing rocks in opencast mining in Siberia.

The engineers at Siemens Drive Technologies were facing a great challenge: They were asked to develop an electric drive that would move a truck with a gross vehicle weight of up to 810 tons and would ensure that this truck was able to transport mined material quickly and reliably. In addition, the project was on a relatively tight schedule. The interval between the inquiry from the customer and the commissioning of the first truck was less than two years.