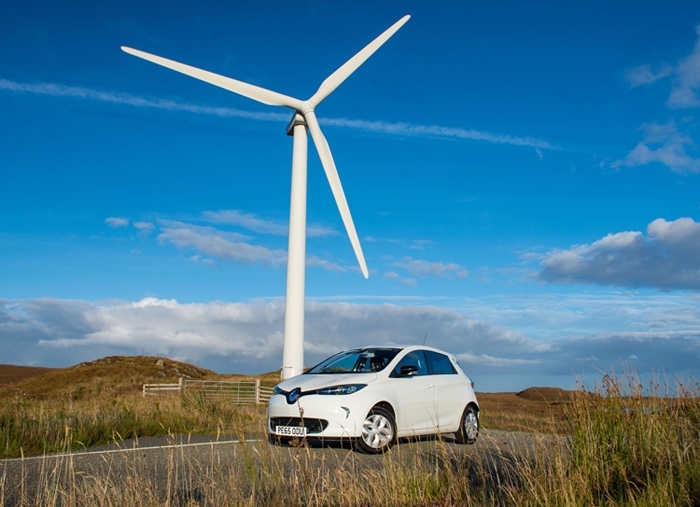 Share
A 10-strong fleet of 100 per cent electric Renault vehicles powered almost entirely by renewable energy can now be hired by residents and visitors to the Outer Hebrides of Scotland.

Much of the electricity will be generated by the Pentland Road Wind Farm, the largest on any Scottish island that was officially opened today.  The nine ZOE hatchbacks and a Kangoo Van Z.E. have been introduced into the remote region through a unique partnership between E-Car Club and the wind farm operators.

The joint venture brings affordable, zero carbon transport to the area and underlines the suitability of electric vehicles in rural as well as urban environments, with the public being able to hire the innovative models on an hourly or daily basis from a number of locations across the town of Stornoway on the Isle of Lewis.

E-Car Club – the UK’s first entirely electric pay-per-use car club – chose the Renault ZOE and Kangoo Van Z.E. for the Outer Hebrides following the success it has experienced with the models at its other nationwide locations, including its St Andrews operation which opened earlier this year. The models’ specification, fun drive, reliability and excellent customer feedback were also key factors in the decision.

Representing an investment of £24 million and developed over a 12-year period, Pentland Road Windfarm will generate power for the new vehicles as part of providing renewable electricity to the islands. Such is the efficiency of the wind farm and the suitability of the local climate to support wind power, the six turbines will supply sufficient electricity to meet the entire domestic load of the Outer Hebrides.

Nearly 700 households in the Newvalley, Guershader and Laxdale Lane, Sheshader, Knock and Swordale, and Stornoway General communities will also receive 50 per cent of the biannual lease payments made by Pentland Road Windfarm to the Stornoway Trust as landlord, while there will also be agreed annual payments to the Western Isles Development Trust.

Great effort has also been made to minimise the impact of the wind farm on the local landscape. Great care was taken during the design and construction stages so as not to upset the free movement of water across the site and habitat reinstatement measures are also ensuring that plant communities typical of moorland are now returning to areas surrounding the turbine bases and access tracks. Local bird species have also been unaffected by the project.

Those living in or visiting the Outer Hebrides will be able hire one of the Renault ZOEs from E-Car Club for only £5.50 per hour or £45 per day (24 hours). Power and insurance are both included in the price. The Kangoo panel van is available for £7.50 per hour or £60 per day.