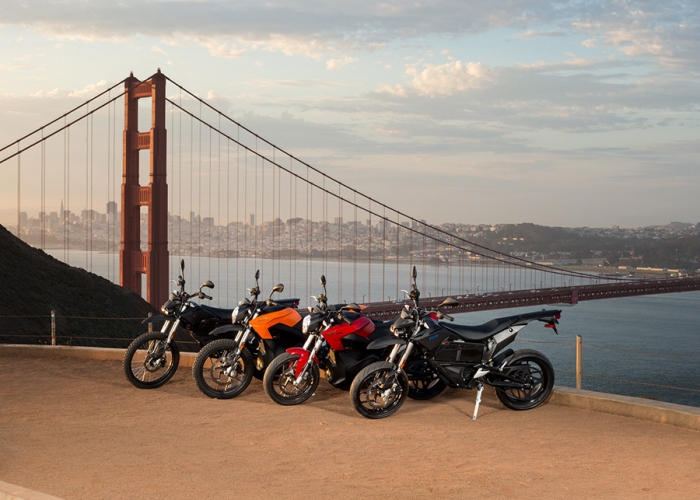 The 2016 announcement began with the introduction of two new motorcycles, bringing Zero’s offering to six distinct models. The supermoto-inspired Zero FXS promises to turn mundane city streets into an urban playground. It features 70 ft-lb of torque, weighs less than 300 pounds and boasts components specifically tailored to provide exceptional control and responsiveness on the street. Adventure riders demanding maximum performance will enjoy the new Zero DSR. With 106 ft-lb of torque, the versatile dual sport is quick on the pavement and demonstrates greater prowess on dirt roads and trails.

“The 2016 line is the culmination of a decade of experience and leverages what we do best: create electric powertrains that deliver a thrilling ride,” said Abe Askenazi, Zero Motorcycles Chief Technology Officer. “The technology is sophisticated, but the way the power is delivered is simple and pure. Ride one, and you’ll understand why we are focused exclusively on electric motorcycles.”

Zero continues to advance state-of-the-art electric motorcycle technology with their signature Z-Force® powertrain. The new Z-Force® IPM (interior permanent magnet) motor produces power more efficiently, cools more rapidly and has higher thermal capability, which translates into significantly improved performance during hard riding and allows higher sustained top speeds. Power is delivered by Z-Force® power packs with optimized lithium-ion cell technology. The system boasts the highest energy density in the electric vehicle industry. Gains in capacity and efficiency have pushed the range up to 197 miles in the city and 98 miles on the highway (at 70 mph) with the optional Power Tank accessory
TagsZero MotorcyclesElectricmotorbike