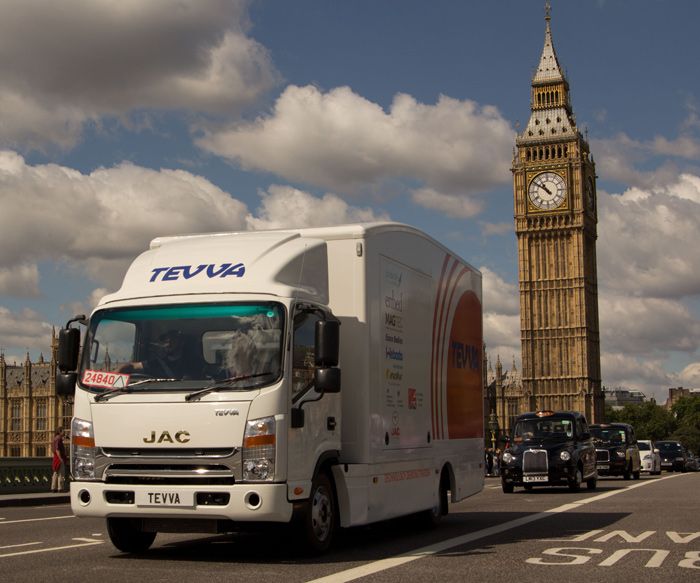 Share
Tevva Motors has developed a new environmentally friendly, low emission solution for back-to-base fleets. Currently being tested on UK roads with three separate vehicles – one of which is in daily use with logistics operator UPS – the electric range extended drivetrain has the ability to reduce and avoid producing emissions completely thanks to Tevva’s intelligent predictive software.

Tevva Motors has developed an electric range extender powertrain which can be fitted into an existing 7.5 tonne truck, either as a retrofit package or on the production line during the build process.

The drivetrain consists of a single 120kW electric motor, capable of producing 1800Nm (1325 lb ft) from zero rpm, powered by 66kWh batteries located on the chassis. The drivetrain also has a range extender unit, which uses a small capacity diesel engine to generate additional charge whilst on the move.

The complete drivetrain is controlled by Tevva’s patent pending Predictive Range Extender Management System (PREMS). Breaking new ground, the system enables the best, most efficient use of electric range extended drivetrain without input from the driver.

With real time access to NOx and air quality data and GPS navigation, the vehicle knows when to use the range extender, such as during high discharge situations on motorways, and when to avoid use, such as urban or poor air quality areas like towns and cities. This enables pure electric propulsion, delivering zero emissions where it matters most. Tevva’s technology ensures the range extender is only used in areas that are less critical, and ensures maximum use of battery charge is made on every journey.

“Tevva’s electric range extender technology removes the operational risk created by pure electric vehicles, allowing unlimited operational range, but typically spending the majority of a day’s operations on electric only. Our proprietary technology enables smart use of the range extender; fleets get the maximum use from the battery power, delivering full low emission benefits and cost savings.”

Made up of a team of automotive and electric vehicle specialists, Tevva Motors passionately believes in creating an environmentally friendly, business-credible solution for fleet managers. Tevva is working to deliver a solution that supports operations, yet is economical, offering a lower total cost of ownership over a vehicle’s lifetime with much lower emissions than a traditional diesel engine vehicle.