The company ICONA, founded by Italians but located in Shanghai, specializes in design and […] 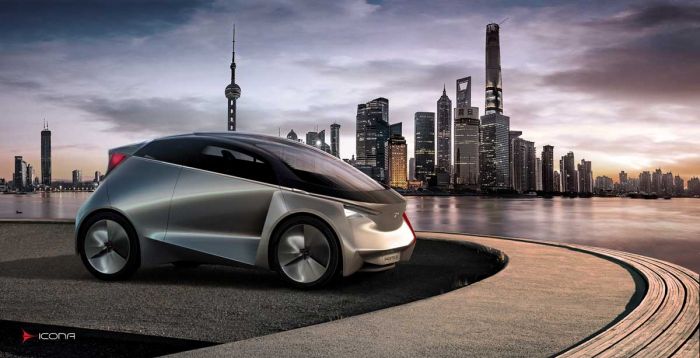 Share http://www.icona-stc.com
The company ICONA, founded by Italians but located in Shanghai, specializes in design and development of prototypes. After launching in 2015 in Shanghai the prototype of an electric city car for tomorrow, this model, called NEO, is presented in Paris at the Exposition and Design Concept Cars Automobile, opened to the public from 27 January to 31 January 2016.

Italy has always been the cradle of automotive design, but after the closure of some of its biggest companies like Bertone and Pininfarina, the beautiful Italian lines have gone to Asian countries. Shanghai is one of these places. Icona is working on its concept of a future town vehicle Neo offering an asymmetrical design to the modern skyline of this metropolis, with its large and peculiar skyscrapers. The Neo fits well into this architecture.

The asymmetry is seen in the door layout, two doors on the right side, and only one on the left side; similar to many of the taxis of the city with the same configuration. The Neo boasts a large two-door opening thanks to the absence of a B pillar.