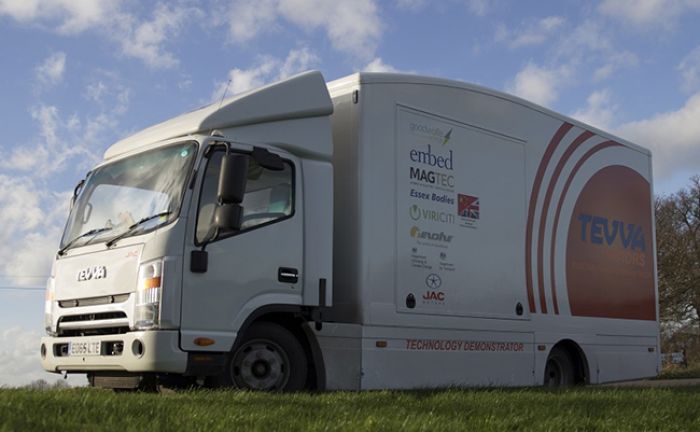 Share http://www.tevva.com
Tevva Motors’ prototype development vehicles have just achieved a combined total distance of 27,000 miles, a landmark achievement for the next generation electric, range extended commercial vehicle. The distance has been covered in less than six months by three prototype vehicles built by the Essex-based technology pioneer.

Each vehicle has Tevva’s next-generation electric range extender powertrain, capable of reducing greenhouse gas emissions by up to 80%*, compared to an average 7.5 tonne diesel engine truck.

The innovative powertrain, which is now available to order, can be fitted on the production line during the build process or fitted as a retrofit package to an existing vehicle. Both solutions are being tested during the development process, with Tevva’s two test vehicles – ‘JAC1’ and ‘JAC2’ – based on the JAC N-Series chassis, and a retrofitted Mercedes-Benz Vario in daily operation with logistics giant UPS.

The drivetrain consists of a single 120kW electric motor, capable of producing 1800Nm (1325 lb ft) from zero rpm, powered by 66kWh batteries located on the chassis. The drivetrain also has a range extender unit, which uses a small capacity diesel engine to generate additional charge whilst on the move.

The complete drivetrain is controlled by Tevva’s patent pending Predictive Range Extender Management System (PREMS). Breaking new ground, the system enables the best, most efficient use of electric range extended drivetrain without input from the driver.

All three vehicles have been pushed to their limits and beyond at the Millbrook Proving Ground but have also been put through their paces on UK roads, travelling the length and breadth of the country, as well as in daily operations with UPS. Each has performed outstandingly over the last six months, with the reliability of the trio enabling a greater distance to be covered than expected. This also enabled the development team to really put PREMS to the test, developing the software as well as the powertrain technology.

Tevva Motors developed the low emission commercial vehicle powertrain that combines an electric motor to drive the wheels and a compact diesel engine to power a generator and extend the range. Combined with Tevva’s powertrain management system, PREMS, the package is a real game-changer, calibrating the use of dual power sources for optimum output and minimum impact. The Predictive Range Extender Management System gets the most out of each fuel source and avoids the drawbacks of each, which is sparking interest in the logistics sector.

Tevva’s electric range extender powertrain will enter full-scale new vehicle production in a couple of years’ time, but retrofit packages are available to order for customers looking to improve their existing fleet, reducing emissions and running costs and providing vehicles with an additional service life.