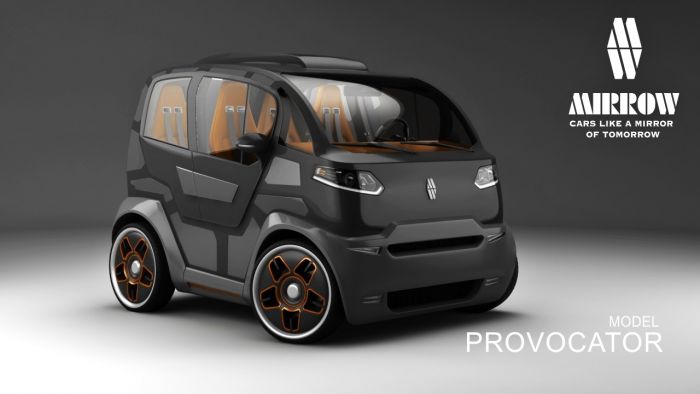 From Russia: The Mirrow Provocator to be at Mondial Paris in October

Share http://www.mirrowcars.com
The start-up from Russian Alexander Malyshev presents the first prototype of the Mirrow Provocator not in 2017 as previously estimated, than in October 2016 at the Mondial de l'automobile Paris. In Paris the compnay likes to show the electric version of the Mirrow Provocator for private users. And they also will present different versions for business: a compact city food-truck, a logistic vehicle for postal services and an elongated on 70 cm taxi for six persons.

Alexander Malyshev said they decided to start with the prototype, but they still need the participation of investors and strategic partners. And he very much hopes that the support will help to the company to bring the project to a new level and after 1.5-2 years Mirrow Provocator will be able to appear on the roads of cities in different countries of the world.

The Provocator car is like the German smart car but offering in the same length of 2.70 meters (x 1.98 m wide and 2.04 meters high) four seats and space for suitcases. This has been achieved by mounting two seats on each side of the body, with access by a central rear door. That`s the solution to offer this space: you enter the car from behind, and has seats on the right and left, meanwhile the space between the seats can be used for suitcases.

It has two doors on each side, but they only serve as emergency exit as they are not to be used for normal entrance and exit. The Provocator is built from light chemical materials, has a modern technology that allows good performance and autonomy, and a really attractive new design.

The abandonment of traditional way of accessing to the car allows to create a car body with the highest level of safety, which is the same as powerful safety cage of the rally cars, and, in addition, also has a powerful systems of the double floor from strong frames.

The original concept of the car body not only have the maximum safety, but also opens the way to a significant reduction in the proportion of powerful elements of metal, which allows to replace some of them on lightweight and inexpensive powerful elements of polymers. This is also without loss of stiffness and strength of the car body more effectively absorb and distribute the impact energy during emergency situations.

From Russia the company expects its revolutionary concept will offer to the world a better life in the cities with an e-Mobility fully adapted to the needs, and also offering these cars for very affordable prices, both in production and for their materials used, which gives another attractive understanding of this car for tomorrow.
TagsMirrow