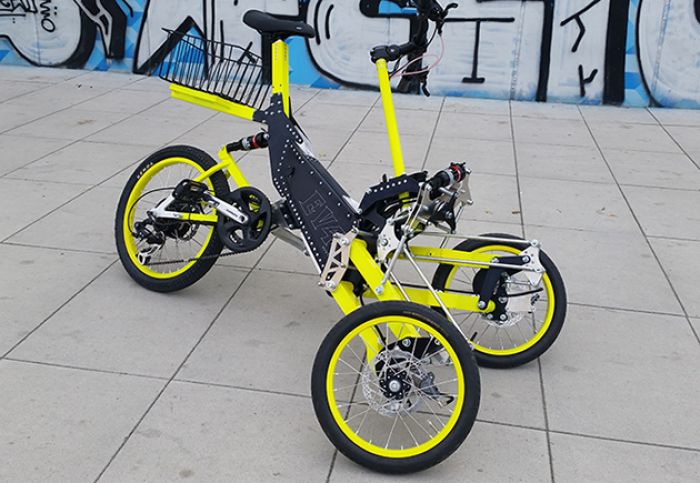 EV4 Bike tilting on the turn

Share http://www.ev4.pl
From Poland cames the last development of an innovative tricycle-bike with an electric help engine with the ability to tilt on the turn, giving a sensation to drive a motorbike.

Jacek Skopinski, manager of Aero-Service company based on Warsaw/ Poland, dedicated to the design, construction and repair and maintance of ultralight metal aircrafts, decided in 2014 to extend the offer and commence with the production of a small four-wheeled electric vehicle, which is the EV4. All the knowledge and experience gained from avionics are carried over to the design and construction of the EV4. The EV4, beginning from project to design and the technology and materials used, has avionic origins.

The idea for an EV4 bike was to create a cycling version of the EV4 quadricycles. The goal was to design a bike with a unique appearance and high quality. After creating the four wheel drive EV4 which was warmly received in the market and has become the key product, some people claimed that the EV4 is OK, but could do with a cycling version, so people could burn off some calories on the way to work. Now the EV4 Bike is born.

The EV4 Bike is a pedelec with three wheels, that means you have to pedal, but your force can be helped by an electric engine. It has two wheels on the front and one on the rear, and on the same time is a tilting vehicle, unique in the design and in the feeling. An original design just as EV4, which would allow to distinguish itself from the crowd.

And as many people were disgusted with the quality of products coming from Asia that are flooding the markets, Skopinski offer high quality for a low price, and best performance for this tilting three-wheeler.

The technical specifications are a BLDC motors from 250W to max 800W, a litio-ion battery pack of 36V and 13Ah, a range between 30 t0 80 kilometers and a speed together with the help of the electric motors up to 25 km/h, to complete the laws. The EV4 Bike is 150 cm long, 60 cm wide and 110 cm high. It has hydraulic disc on the three wheels to guarantee a very good braking system... and a aluminium frame from the aeronautic field.