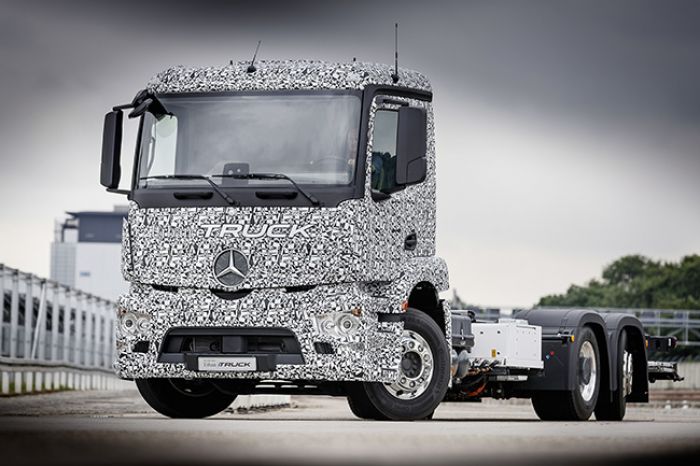 Share
Daimler presents its first 100% electric truck up to 25 tonnes for future urban transport. Two engines with an output of 2 x 125 kW, while the peak torque is 2 x 11.000 Nm - after torque conversion by the gearing - gives a considerable level of performance and driving dynamics. This truck will be presented on the 2016 IAA Motor Show in Hannover (22nd to 29th of September).

It makes its way silently through the city with zero local emissions: The Urban eTruck from Mercedes-Benz represents the state of the art when it comes to all-electric heavy-duty short-radius distribution up to 25 tonnes. It is based on a unique concept: its drive is by means of electric motors adjacent to the wheel hubs, while the power supply comes from a modular battery pack. This puts the Urban eTruck on a par with conventionally engined trucks when it comes to payload and performance. At the same time, it is unsurpassed in terms of environmental compatibility, local zero emissions and quiet operation.

The Shaping Future Transportation initiative is continuing: after the Mercedes-Benz Actros with Highway Pilot and Highway Pilot Connect for long-distance transport, the Urban eTruck now sets a landmark in urban freight transport. It will celebrate its public premiere at the 2016 IAA International Motor Show for Commercial Vehicles. Daimler Trucks will systematically test and further develop the revolutionary technical concept in the coming years. Standard-production vehicles of this type would be conceivable from the start of the next decade.

The Urban eTruck is the answer to urbanisation and environmental problems. Air quality, noise, restricted-access zones – cities around the world want and need to protect their citizens from exhaust and noise emissions. At the same time, the trend towards urbanisation is on the rise. 2008 was the first year in which more people have lived in cities than in the countryside. The trend is continuing, with the United Nations predicting a global population of nine billion people by 2050, approximately 70 percent of them living in cities. The same percentage has already been reached or exceeded in all major western European countries.

The situation is exacerbated by the fact that most production takes place in cities, which are home to industry, trade and commerce as well as to people and businesses that need supplying with food and goods – often at times of day when any noise is perceived as a nuisance. The three-axle rigid Urban eTruck from Mercedes Benz features a tailor-made concept for highly efficient and clean short-radius distribution. Its outstanding attributes include an electrically powered rear axle with electric motors directly adjacent to the wheel hubs.

The power is supplied by modular packs of lithium-ion batteries. The basic pack with a total capacity of 212 kWh provides a considerable range of up to 200 km. This is calculated in short-radius distribution for a three-axle truck of the kind used to deliver food products. Thanks to the well-thought-out concept with motors adjacent to the wheel hubs, the batteries are housed in a crash-proof location inside the frame.