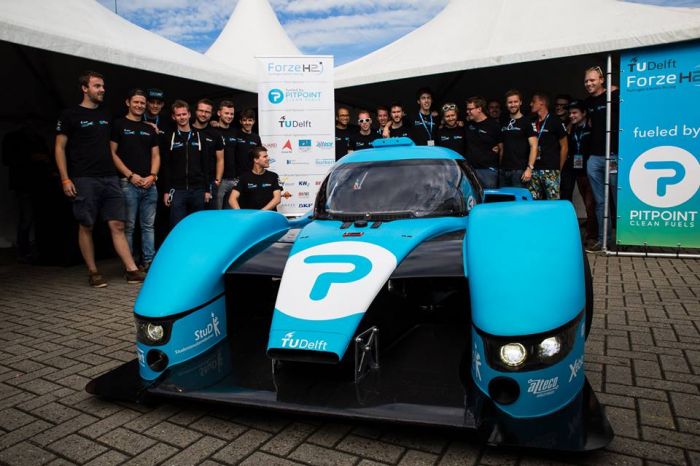 Share http://www.forze-delft.nl
With 70 passionate and talented students from mostly the TU Delft Forze build the first hydrogen-electric race car. The goal of the team is to promote the use of hydrogen in race cars. The VII is the newest creation prepared to set new world records.

During the eight years Forze exists they have built six cars and achieved multiple great things with these cars like building the fastest hydrogen race car ever.

The Forze VII is a hydrogen-fueled car. This means that hydrogen is tanked, which is an expertise of the new main sponsor Pitpoint. Together with oxygen from the air, this will be converted into water and electricity. The cars of Forze are the only racecars on earth which can be driven without any harmful emissions. Also, refueling is just as fast as normal fossil fuel, which is a big plus, according to team manager Everaert. Students of the TU Delft use many innovative technologies like KERS (Kinectic Energy Recovery Systems) which can be found in Formula 1 cars as well.

Formula 1 driver Jan Lammers is excited about the Forze VII: “It is important that our country is aware of the alternatives of fossil fuels. Naturally, this hydrogen race car will battle against fossil fueled cars: hydrogen is an alternative with unlimited possibilities, unlike the limited amount of fossil fuel. I will follow the news of Forze with much interest.”

The Forze VII has a top speed of 210 km/h, is going from 0 to 100 km/h in less than four seconds and produce only clean wastwater. It is based on a LMP monocoque chassis, weights 1.100 kg and is powered by two Yasa P400 electric motors.

The driving is a little different as it has an energy buffer that requieres charging, the driver has to know when is the right moment. The hydrogen is stored in two tanks, the fuel cell used has 136 CV but the car also need a boost power that will be of 270 CV to produce constantly the power needed for the microcontrollers.