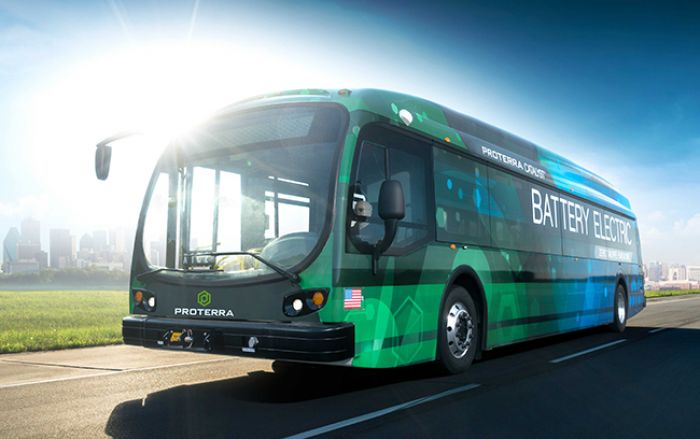 Proterra Catalyst E2 more than 600 miles on a single charge

Share http://www.proterra.com
Proterra, the leading innovator in heavy-duty electric transportation, unveiled the newest addition to its fleet of zero-emission vehicles: the Catalyst E2 series, named for its unprecedented Efficient Energy (E2) storage capacity of 440 – 660 kWh. Last month, an E2 series vehicle achieved a new milestone at Michelin’s Laurens Proving Grounds where it logged more than 600 miles on a single charge under test conditions.

Compelled by a total cost of ownership significantly lower than fossil fuel-based alternatives, transit agencies across the U.S. agree that diesel’s dominance is waning, giving way to the economic and environmental benefits of battery-electric mass transportation:

Barry Barker, Executive Director, Transit Authority of River City: “TARC now has largest deployment of Proterra battery-electric buses east of the Mississippi. Providing both environmental benefits and cost savings, these buses are a symbol of Louisville’s sustainability efforts. We are proud of these positive impacts and to call Proterra a partner, as they pass this key milestone in their journey as the foremost transport innovator in the world.”

Doran Barnes, Executive Director at Foothill Transit: “We just surpassed one million miles of revenue service with our battery-electric Proterra fleet, and we’re looking forward to many more miles to come. Since our first EV bus procurement with Proterra in 2010, we knew that zero-emission buses were the future of mass transit. Now, with the new Catalyst E2, this vision is a reality.  We’re excited by the possibilities of an all-electric future.”

Jonathan Church, Administrator at Worcester Regional Transit Authority (WRTA): “More and more, we’re witnessing our neighbor agencies consider all-electric buses, as they see how well our Proterra buses have weathered some of the ugliest Northeast snow storms. We look forward to continuing our partnership with Proterra as their technology continues to expand within North America.”

With annual sales already 220% higher than 2015, Proterra is experiencing a breakthrough year in the mass transit sector and expects the debut of the Catalyst E2 series to only further magnify this success. Doubling production in 2017 to serve unprecedented customer demand, Proterra will have both of its manufacturing lines in full operation in Greenville, S.C. and the City of Industry, Calif. To date, Proterra buses across the United States have completed over 2.5 million miles of revenue service, displacing 540,000 gallons of diesel, and eliminating over 10 million pounds of carbon emissions.

“Proterra’s primary goal has always been to create a purpose-built, high-performance electric vehicle that can serve every single transit route in the United States. Today, with the unveiling of the Catalyst E2 Series, that goal has been achieved,” said Ryan Popple, CEO of Proterra. “The question is no longer who will be an early adopter of this technology, but rather who will be the last to commit to a future of clean, efficient, and sustainable mobility. With the Catalyst E2 offering a no-compromise replacement for all fossil fuel buses, battery-electric vehicles have now broken down the final barrier to widespread market adoption.”

Proterra is a leader in the design and manufacture of zero-emission vehicles that enable bus fleet operators to eliminate the dependency on fossil fuels and to significantly reduce operating costs while delivering clean, quiet transportation to the community. Proterra has sold more than 312 vehicles to 35 different municipal, university, and commercial transit agencies throughout North America. Proterra’s configurable EV platform, battery and charging options make its buses well suited for a wide range of transit and campus routes. With unmatched durability and energy efficiency based on rigorous U.S. certification testing, Proterra products are proudly designed, engineered and manufactured in America, with offices in Silicon Valley, South Carolina, and Los Angeles.
TagsProterra