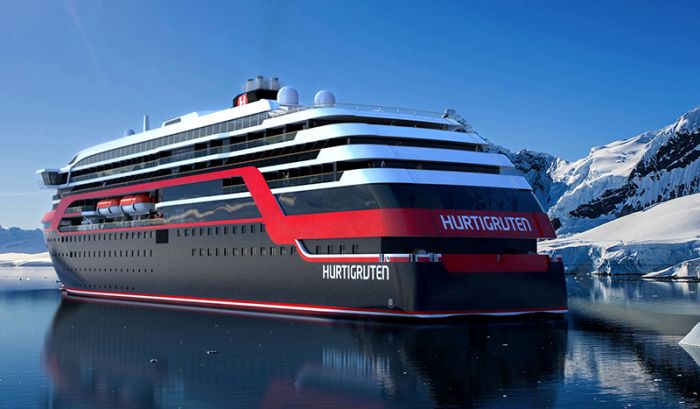 Share
Norwegian coastal exploration travel company, Hurtigruten, will invest in a hybrid propulsion solution for two new 530-passenger expeditionary ships in a bid to reduce fuel consumption in the Arctic and Antarctic.

The 20,000-ton ships, constructed at Kleven Yards in Norway, will be the world’s first expeditionary ships with hybrid propulsion; to travel in such vulnerable landscapes as the Arctic and Antarctic.

The hybrid ships will be built in two phases. The first ship, which will be delivered in July 2018, will be equipped with an auxiliary electric engine that will reduce CO2 emissions by 20%, or 6,400 tons per year compared with conventional ships.

The second vessel, to be delivered in July 2019, will feature a hybrid engine that can power the entire ship for longer periods of time and distances, into fjords and in vulnerable areas. The technology, which has been developed by Rolls-Royce and Bellona, a non-profit organization that works to address climate change, will allow for sailing for up to 30 minutes on battery-powered propulsion.

The company like to demostrate with these two vessels that hybrid propulsion on large ships is possible today.
TagsHurtigruten