Nikola presents his new super truck One in Salt Lake City, a Class 8 truck. The Nikola One utilizes […] 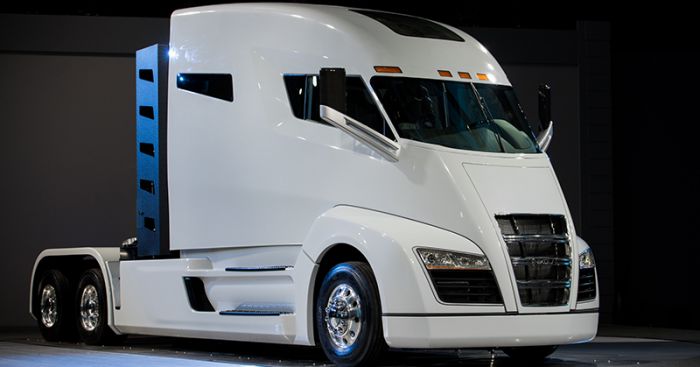 Share http://www.nikolamotor.com
Nikola presents his new super truck One in Salt Lake City, a Class 8 truck. The Nikola One utilizes a fully electric drivetrain powered by high-density lithium batteries. Energy will be supplied on-the-go by a hydrogen fuel cell giving the Nikola One a range of 800 - 1,200 miles while delivering over 1,000 horsepower and 2,000 ft. lbs. of torque – nearly double that of any semi-truck on the road. Never has a production model class 8 truck achieved best-in-class fuel efficiency while also dramatically improving performance over its diesel competition – all with zero-emissions.

“Nikola will build a world-class advanced manufacturing facility which will create thousands of new jobs,” said Nikola Founder and CEO Trevor Milton. Nikola is currently in discussions with several states to decide who to partner with in its effort to reduce America’s dependence on fossil fuels, advance green energy and revolutionize the trucking industry. The location of the Nikola Motor manufacturing facility will be determined in the first half of 2017.

Nikola Motor Company also unveiled it plans for a 1,000 lb., 107 kWh battery pack for its electric UTV, the Nikola Zero. “Our battery engineers have made major advances in storage and cooling,” said Milton. “We believe our lithium battery packs are more energy dense and weigh less than any available vehicle production pack per kWh. This new battery pack should give our UTV over 300 miles of range on a single charge,” added Milton. Nikola plans to offer its patent pending battery packs to OEMs for purchase beginning in 2017.