The ZEV LRC has become well known, respected, and regarded as the top performing electric motor […] 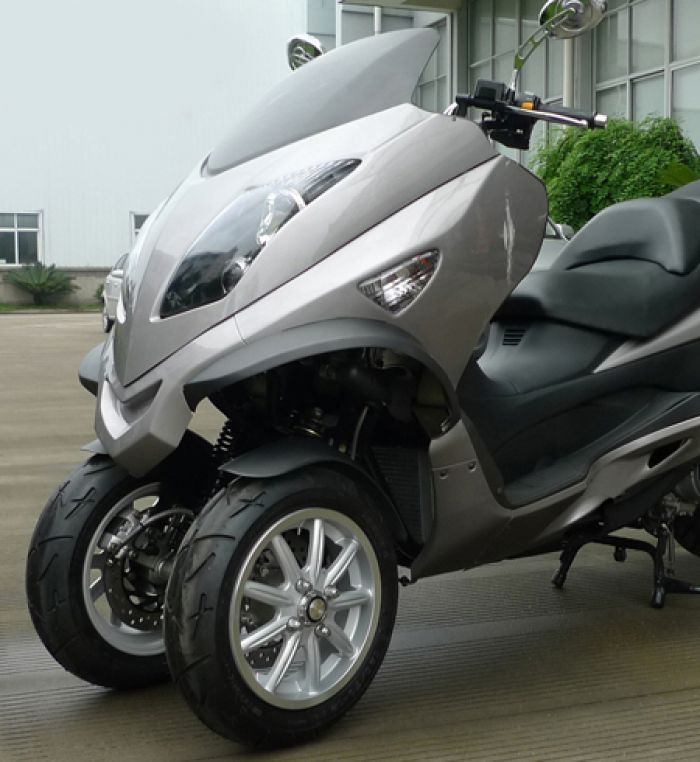 Share
The ZEV LRC has become well known, respected, and regarded as the top performing electric motor scooter in the world. Constant work on brakes, handling, range, and speed have made it the world class leader. Now, based on customer request, the company has introduced the ZEV LRC trike after several years of testing and tweaking. The goal was to offer more all road "sure footed" handling and to make it easier for a broader segment of the population to ride.

All controls including the brakes of the new trike are on the hand, but the bike is fitted with a parking brake. It will stand upright when stopped once the upright control lock has been engaged. The three-wheeler is a tilting/leaning design where all wheels lean going through a turn.  In this style trike design, the inside of the turn front wheel does not lift and break traction as on non leaning trike designs. The bike is fitted with reverse to aid handling and enable backing up on the motor power alone.

The standard bike is 15 kw power (with an option for an 11 kw power to meet European country rules for power in a trike to drive without a motorcycle license in some country, or with an A license). Now, the three-wheeler RC-T15 has an introductory price of $13,990.

The standard LRC T15 has a 10 kwh battery pack using 28 cells of 100 ah each.  For those riders that do not need the long range of the T15, the T6 model using 28 cells of the smaller 60 ah battery cells is available at a lower cost.  While less battery capacity reduces the vehicle price and range, it does not reduce the speed or acceleration.

ZEV is a group of hard core aerospace and mechanical engineers and business people that banded together to prove they could outflank, out design, and out perform everyone else in the alternative fuel vehicle market. They are all racers and designers of spacecraft, motorcycles, rockets, race cars, race boats, (UAV) unmanned drone aircraft, and piloted aircraft. High performance and sophisticated engineering is spoken here.  The senior management (+30 years) is internationally experienced, with numerous start ups and Fortune 500 operations on their resume.  Senior management spent over thirteen weeks a year on the road in the factories of suppliers for both ZEV and for the corporate customers who hire ZEV to design their electric vehicles and manage their production.  They firmly believe that electric vehicles are the fuel and environmental solution.

"We believe that the way to change the world is to build world changing products. We are the guys that irk the huge companies.  We like to show up at the races with our small shop built bike and take home the trophy."
TagsZEV