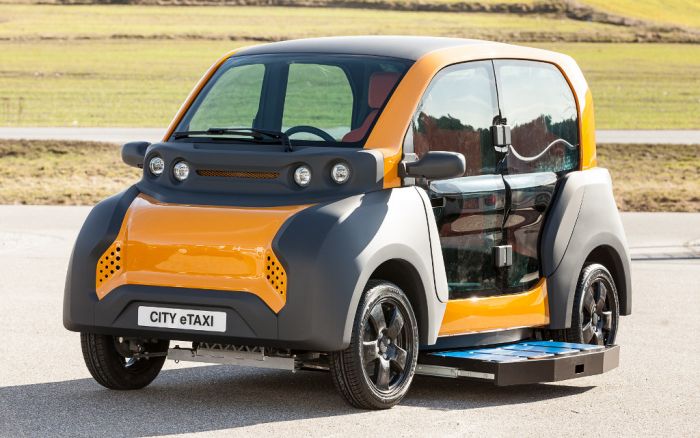 Share http://www.adaptive-city-mobility.de/
The German company Adaptive City Mobility (ACM) has presented its City eTaxi at the German Cebit Fair (March 20-24), a light three-seater vehicle designed for urban traffic, which aims to enter the market for light electric taxis of the future, but not limited to this utility. It is a project supported by the German Ministry of Economy and Energy.

The City eTaxi stands out for its weight and its small size, while offering the maximum of interior space and comfort, all combined with electric motors and batteries of the latest generation. It is about creating a very efficient vehicle. The model was developed and built by the experts of Roding Automobile.

Its dimensions are 3.30 meters long, 1.48 meters wide and 1.56 meters high. It offers a space for three people, with the driver in the center and a passenger seat on each side slightly further back. This is a concept that has its story that we will tell you on another occasion - but to this day has not convinced too much. But thanks to this concept the space for the passengers is greater than anticipated in a car of these dimensions, which also offers a trunk volume of 360 liters. In fact, the center seat of the driver is rotating to facilitate a quick entry and exit to the vehicle.

The base of the City eTaxi is a composite frame, mixing aluminum parts with CFK, a composite material with fibers, which is also used on the rims. An aluminum floor has been created for the battery pack, a system of eight modular accumulators, which can be individually extracted and replaced by full accumulators.

The vehicle will also be offered without the rear seats simply as a van, offering enough space with 1,300 liters and a load weight of 380 kg, for the usual transports within the cities. After its presentation at the Cebit fair in Germany, this vehicle now has to carry out exhaustive real tests to look for a production plant later on.
TagsTaxiACM