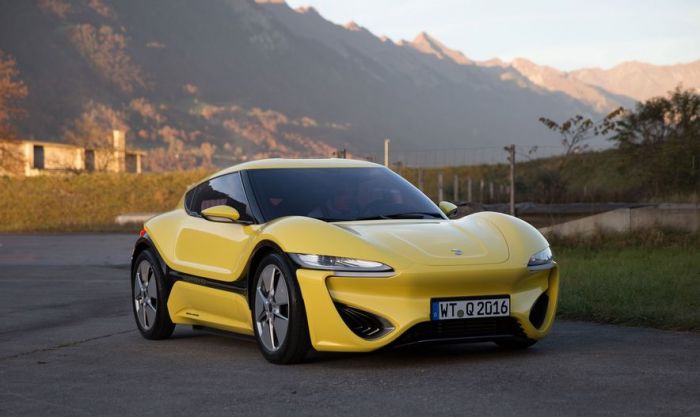 Share http://emagazine.nanoflowcell.com/en/technology/flow-cell-power-1000-km/
It's an early evening in late December when representatives of the nanoFlowcell development department meet in Zürich with engineers from a leading Asian car maker. The occasional technology updates with industry are generally far from routine, but this particular evening should be a very special kind of meeting. The delegation sits around a table set for dinner and follows with interest the presentations delivered by Nunzio La Vecchia, the Chief Technology Officer of nanoFlowcell Holdings, as he explains the significance of his latest research progress.

Last October, nanoFlowcell Holdings announced a breakthrough in flow cell research - they had finally succeeded in achieving variable control of flow cells. Initial tests in the QUANTiNO demonstrated the unrestricted dynamism and stability of the drive system even without supercapacitors. Dispensing with the supercaps, which were previously used as buffer storage to regulate the energy flow in mobile applications, delivers an enormous reduction in weight and cost in the design of electrified drive systems. Put simply, it means that electric cars can cost less in future than present-day vehicles with internal combustion engines - and far less than current electric cars.

In recent months, development engineers at nanoFlowcell Holdings have been hard at work, making the electric drive in the QUANTiNO even leaner and testing the reprogrammed VCU for directly controlling the flow cell. The latest tests with the redesigned nanoFlowcell drive system are aimed at confirming its readiness for series production.

Suitability for production is an important factor in evaluating the success of a new automotive technology, but this is always viewed in the context of the performance and production costs of this technology. How much additional cost is reasonable for how much progress? In the case of this new nanoFlowcell system architecture, technological progress leads to greater performance paired with a reduction in cost. This happens so seldom in automotive engineering that it became the focus of discussions on this particular evening.

How much is left of the range, top speed and pulling power of the QUANTiNO now that the flow cell supplies the motors directly with energy? There is always a degree of scepticism in the engineers' questions. They understand La Vecchia's technical presentations on the directly controllable flow cell, but the performance potential of the QUANTiNO seems too abstract for them to place their faith in words alone. Yes, cost reduction is good, but without supercaps? The dinner menu is promptly ditched and instead of rounding off the evening with dessert, they opt for a drive in the QUANTiNO. Outside, the temperature is an icy four degrees below zero. The appointment originally made in the calendar for the "nanoFlowcell update presentation and dinner" was scheduled to last three hours - with possible delays planned in. But so much for planning. Nobody wants to miss the chance for a test drive in the QUANTiNO without supercapacitors.

Preparations are hurriedly made to take the QUANTiNO out for a motorway test drive. The car is in the QUANT test workshop near Zürich awaiting sign-off for the internal test drive scheduled for the following day. The system check thus ended up being a short one. Four more minutes to fill up the tank and we're off.

The initial scepticism of the "guest drivers" switched to delight after the first 600 kilometres. After 800 kilometres, they were fully convinced that this kind of performance would not be achievable with the technology currently used in electric car design. Once they were at the wheel, they were determined to keep driving the flow cell sports car until the company's promise was fulfilled and the QUANTiNO had reached the target distance of 1,000 kilometres - after a full eight hours and 21 minutes. On a test track, those 1,000 kilometres would have been covered in no time, but on Swiss motorways there's a strict speed limit of 120 km/h.

The long night may be clearly etched in the faces, but at the same time, the adrenaline of the sustained euphoria keeps everyone wide awake. After all, we have all just witnessed a silent world record. The engineers know that a distance like that is unattainable for conventional electric vehicles - not at that speed, not in that time - simply not technically possible right now.

Cost-efficient range, a powerful, environmentally friendly drive without harmful emissions plus fast and straightforward refuelling with energy carriers that are safe and sustainable to produce - those are the political demands for the individual mobility of the future, and with which industry continues to struggle.

With the QUANTiNO, nanoFlowcell Holdings was once again able to prove the technical performance potential of its flow cell technology. It presented the guest engineers with the opportunity to consider important questions relating to the feasibility of this drive technology. La Vecchia and his team know that the question of the hen and the egg cannot be answered on paper: What comes first, the fuelling infrastructure for the bi-ION electrolyte solution or the electric vehicle with nanoFlowcell drive?

Possible scenarios are currently the subject of "low key" discussions with a variety of industry representatives. What many partners don't realise until the process is underway is something that became clear to the nanoFlowcell team long ago - the challenges that follow are not of a technical nature. It's not simply a matter of integrating nanoFlowcell® technology into the EV line-up of one or several automotive groups, but of nanoFlowcell technology "wiping the slate" of current thinking in electric mobility - not to mention its individual charging stations, numerous socket configurations and plugs to differing standards. Electric mobility is dead, long live electric mobility! As a consequence, billions in investments already made by politics and industry in dead-end technologies - in the likes of lithium-ion batteries, fuel cells or so-called biofuels - would have to be written off. Who is prepared to do that - and to start afresh?

It's clear to La Veccia that nanoFlowcell® is a radical innovation and an uncompromising win-win technology for the environment, consumers and industry. However, changing the mindset of those in positions of responsibility is a slow process. The pressure to change things to benefit the environment and society as a whole is pervasive, but not yet painful enough for the main players to have real, serious consequences.

At nanoFlowcell Holdings, we are not discouraged by this, but see it instead as an additional challenge. The euphoria of the night is intoxicating. Once the manufacturer delegation has left, the chief engineer drives a lap of honour until the 190 litres in the tank are fully used up. The QUANTiNO 48VOLT with 2 x 95 litres of bi-ION covered no less than 1,401 kilometres - a distance achievable right now only with a flow cell. The last few kilometres to the nanoFlowcell Holdings R&D centre are covered on the back of a trailer. Work is already ongoing on a new generation of QUANT fuel cell drives, which will soon provide an insight into the electric mobility of the near, very near, future.