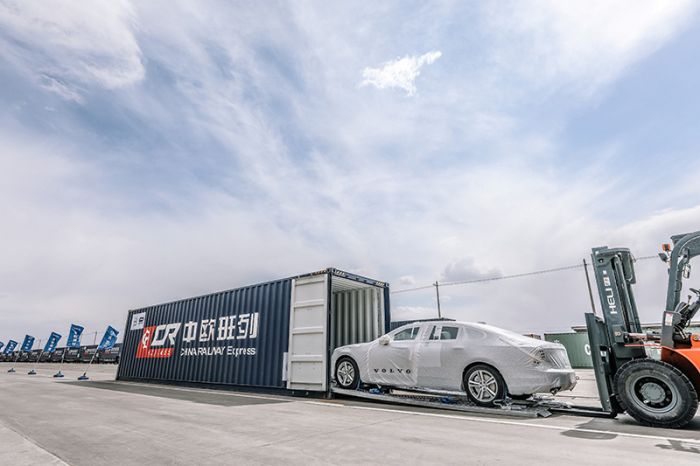 Share
Volvo Cars has become the first car maker in the world to export China-made cars to Europe by train via China’s new ‘One Belt, One Road’ trade initiative.

And even though the first Chinese Volvo that arrives in Europe is not electric, the information is relevant because it opens a new way of communication by train, much cheaper than by boat, better for the environment, rather faster, and with the possibility that in future large quantities of Chinese electric cars can come to Europe via this route.

The first S90 premium saloons, built at its Daqing plant in China, will arrive at a distribution centre in Zeebrugge, Belgium this week.

The cars have been transported to Belgium via the recently opened China-Europe railway link. The connection brings down the time it takes to transport vehicles to Europe by two thirds compared with the naval route, meaning customers receive their car faster after ordering.

The train route ties Volvo’s global manufacturing and logistics strategy to the multi-billion euro trade flows between China and Europe and the so-called One Belt, One Road initiative that seeks to resurrect the age-old Silk Road trade route for a new era of global trade.

The railway link also illustrates how China is turning into a global manufacturing and export hub for high-end consumer products.

Volvo was the first Western car maker to export a premium China-made car to the US in 2015 with the S60 Inscription. In November of last year, Volvo started building high-end versions of its S90 premium saloon in Daqing for global exports, and will soon be building all S90 vehicles in the factory for global export.

Beyond shorter waiting times for customers, rail is also a smarter choice in terms of the environmental impact of logistics operations. Given the same distance, the CO2 emissions per tonne/km are reduced by a third by choosing rail over sea transport. In this case, the savings will be even higher based on the shorter distance.

Each of the Volvo-dedicated trains travelling between Daqing and Zeebrugge carry around 120 Volvo cars, which are transported in specially designed containers. One container holds three cars at different angles in order to maximise the use of space available inside. Special fixtures ensure that the cars are fastened during transport and do not move

Initially, trains will depart from Daqing once a week. The plan is to increase this frequency in line with growing volumes.

The first S90 saloons will arrive in Zeebrugge on May 31, the same week as China’s Prime Minister, Li Keqiang, visits Belgium. In connection with his visit in the country, Li Keqiang is also scheduled to meet with Volvo Cars’ chairman Li Shufu and CEO Håkan Samuelsson.
TagsVolvo