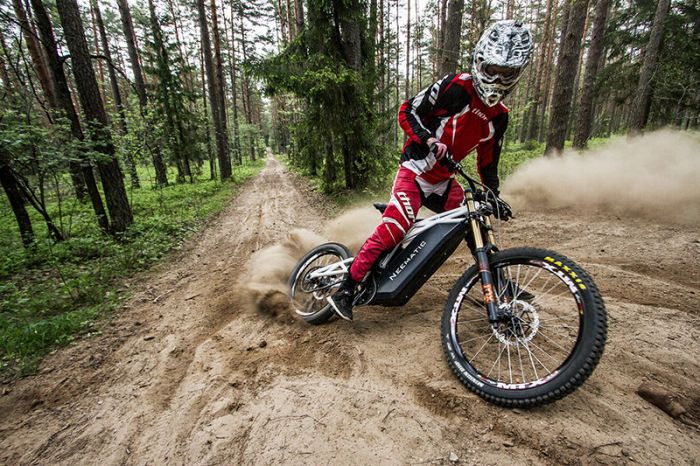 Share http://www.neematic.com
With its 20 kW peak power brushless motor, lightweight mid-drive aluminum frame and hardcore off-road suspension, the FR/1 is the perfect fusion of MTB and dirt bike. Riders can reach top speeds of 100 km/h, a range of 50 to 100 km and experience great handling whether they’re climbing uphill or shredding the trail.

Neematic, a new player in the e-bike market made its first public appearance of their extreme performance electric bike - FR/1 - at Intermot 2016 in Germany.

As Domas Zinkevicius, co-founder and chief engineer, explains: “We wanted to create a top performance e-bike for rough terrain. Most importantly, we’ve been able to integrate the motor in the frame and remove unsprung mass in the rear wheel. It is this weight distribution alongside the bike’s immense torque that puts Neematic at the frontier of high performance e-bikes.”

Initial design and engineering for the bike was commenced in early 2014, with Neematic then being established in 2015 with backing from Practica Capital, a venture capital fund. The engineers behind the bike, Domas and Linas, leverage 12 years of experience in electric bicycle builds and race suspension engineering.

Neematic is set to launch a pre-order campaign for FR/1 and start serial production in 2017.