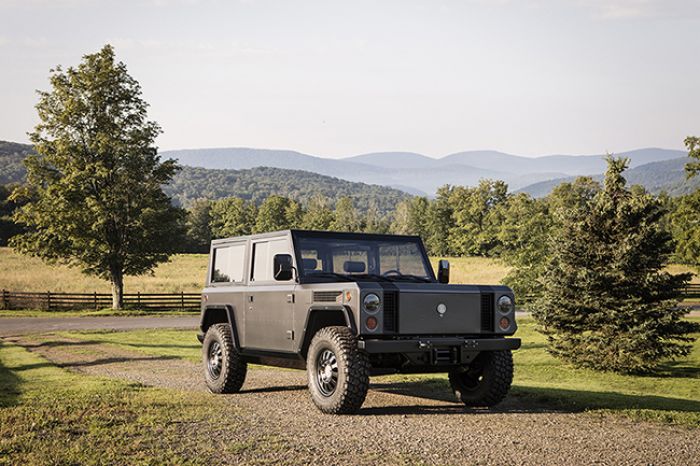 Share
The all-electric sport utility truck from Bollinger with its aluminium architecture uses front and rear mounted electric motors of 270 kW (360 HP), had a massive 472 lbft of torque, gets from 0-60 km/h in only 4,5 seconds with a high speed of 127 miles per hour. With the 100 kWh battery pack it goes for 200 miles without recharging.

Bollinger Motors revealed the all-electric B1 sport utility truck to a global audience during a media event at the Classic Car Club of Manhattan. Created from a clean sheet using a lightweight aluminium architecture, the Bollinger B1 is innovating the truck category by building the world's first fully working prototype of an all-electric sport utility truck.

The vehicle incorporates a rugged, heavy duty truck design with a classic, 3 box look that will resonate with contemporary and traditional off-road vehicle enthusiasts. At an overall length of 150 (in), a width of 76.5 (in) and a height 73.5 (in) the B1 has an impressive stance and a perfect 50/50 weight balance front to back and side to side. The dual motor powertrain provides full time all-wheel drive, with best in class horsepower, torque and ground clearance distinguishing it from every other truck currently on the market.

The B1 employs an advanced chassis structure to underpin the vehicle and house its battery system and provide support for its off roading components. The all-aluminium chassis with a high strength, low alloy (HSLA) steel rollover structure is designed for optimal off road vehicle proportions. Its ports a wheelbase of 105 inches, front and rear track of 68 inches, an approach angle of 56 degrees, departure angle of 53 degrees, and break over angle of 33 degrees. The chassis by itself weighs just 295 pounds while not sacrificing structural or torsion al rigidity.

The base ride height provides for 15.5 inches of ground clearance but will be adjustable using a selfleveling, 4 wheel independent, hydro pneumatic suspension within the 10 inches of wheel travel. Disconnectable antiroll bars allow traction enhancing, full suspension articulation during off-road manoeuvres.

“Because the entire drivetrain and battery storage system is located between the chassis rails, the B1 has abundant and unique storage areas and a very low centre of gravity providing for unsurpassed stability,” said Karl Hacken, Bollinger Motors’ lead engineer. “ The hydraulically assisted steering rack was designed in-house allowing us the ability to fine tune the driving dynamics to our exact specifications.”

The chassis rides on Mud Terrain LT285/70/R17 tires with high offset aluminium wheels for go anywhere traction and performance. The wheels are attached with eight lugs to knuckle housed, geared axle hubs, which allow the entire suspension system to be raised on the chassis giving it the ability to clear a multitude of off-road obstructions. The regenerative braking system consists of 11.75 inch vented inboard discs and four piston callipers.

While the Bollinger B1 sports serious off-roading credentials, the vehicle also has impressive performance statistics generating 360 horsepower and a massive 472 lbft of torque. And with the instant torque provided courtesy of the electric drivetrain, the B1 has a noteworthy 0-60 time of just 4.5 seconds and a top speed of 127 miles per hour. The B1 weighs in at just 3,900 lbs giving it a 10.8 power to weight ratio. With a payload capacity of 6,100 lbs, the gross vehicle weight rating (GVWR) checks in at just over 10,001 lbs.

“At either a 120 or 200 mile estimated range, the Bollinger B1 will have more range than most electric vehicles on the road today," said John Hutchison, Bollinger Motors engineer. “The average US driver travels less than 36 miles per day, so the B1 has plenty of charge for anything you throw at it. I think we found the right combination of utility, off-road capability and range options.”

The B1 has a J1772 universal connector for conventional 110V and 220V charging while Level 3 “DC Fast” charging is completed through a CHAdeMO protocol charge port on the vehicle’s fender. The battery pack compartments are encased in four layers of protection between metal casings and water tight seals which are engineered to withstand submersion under 3.3ft of water for 30 minutes, which is the industry standard for EV.

Bollinger Motors has a design, engineering and development centre in Hobart, New York and the company is in talks with third party independent vehicle manufacturers in the US who are conducting feasibility studies and financial estimates. Using an established manufacturer brings with it an inherent knowledge of the build process and also helps to control and mitigate costs. Bollinger is also engaged with the state of New York and reviewing options for potential future build facilities.

"While we'll be announcing pricing and manufacturing targets later this year, the business case for the B1 makes sense at a very realistic and modest production number and at a price point of a nicely equipped sport utility vehicle," said Bollinger. "When you factor in this vehicle's superiority over the other choices on today's market, we think we have a winning combination."

Once manufacturing is finalized, B1 deliveries are targeted to start within 19 months. Initially a direct to consumer sales model will be employed for the B1 and, in the future, Bollinger will also look to open company and retail stores in major cities across the US. For now, the B1 will be available through bollingermotors.com and interested individuals can reserve a spot simply by signing up online with no money down. In early 2018 reservation holders will be able to order their B1 with a $1,000 down payment.