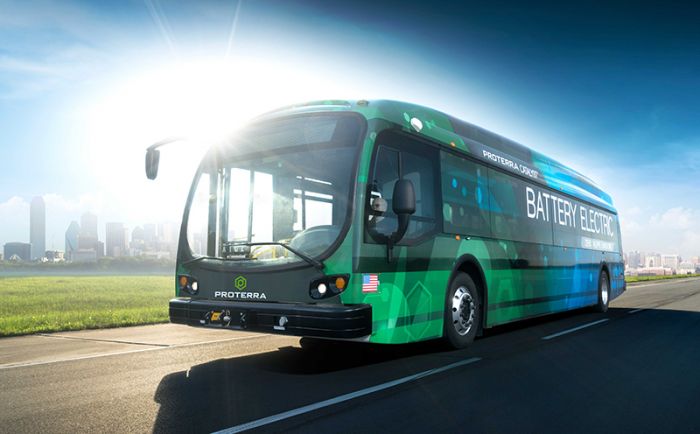 Share http://www.proterra.com
Proterra announced it has set a world record for driving the longest distance ever traveled by an electric vehicle on a single charge at the Navistar Proving Grounds in New Carlisle, Indiana. Proterra’s 40-foot Catalyst E2 max coach traveled 1,101.2 miles this month with 660 kWh of energy storage capacity.

“For our heavy-duty electric bus to break the previous world record of 1,013.76 miles — which was set by a light-duty passenger EV 46 times lighter than the Catalyst E2 max — is a major feat,” said Matt Horton, Proterra’s chief commercial officer. “This record achievement is a testament to Proterra’s purpose-built electric bus design, energy-dense batteries and efficient drivetrain.”

Beyond meeting transit agencies’ range requirements, the Catalyst E2 max is poised to make a significant impact on the transit market because of its low operational cost per mile compared to conventional fossil fuel powered buses. According to Bloomberg New Energy Finance, lithium-ion battery prices have dropped by roughly 72 percent since 2010, and the economics for batteries continue to improve. Between li-ion battery cost savings and improving vehicle efficiency, electric vehicles represent the most disruptive mode of transport today.

“Driven by the best cost savings-per-mile, we believe the business case for heavy-duty electric buses is superior to all other applications, and that the transit market will be the first to transition completely to battery-electric powered vehicles,” said Ryan Popple, Proterra CEO. “Early electric bus adopters like our first customer, Foothill Transit, have paved the way for future heavy-duty applications, like motor coaches and commercial trucks. As we see incumbents and more companies enter the heavy-duty EV market, it has become very apparent that the future is all-electric, and the sun is setting on combustion engine technology.”

Proterra is a leader in the design and manufacture of zero-emission heavy-duty vehicles, enabling bus fleet operators to significantly reduce operating costs while delivering clean, quiet transportation to local communities across the United States. With more than 400 vehicles sold to 42 different municipal, university and commercial transit agencies in 20 states, Proterra is committed to providing state of the art, high-performance vehicles to meet today’s growing market demand. The company’s configurable Catalyst platform is capable of serving the full daily mileage needs of nearly every U.S. transit route on a single charge. With unmatched durability and energy efficiency based on rigorous U.S. certification testing, Proterra products are proudly designed, engineered and manufactured in America, with offices in Silicon Valley, South Carolina, and Los Angeles.
TagsProterra