In the historical documents of the Spanish company Hispano-Suiza the information was found, that the […] 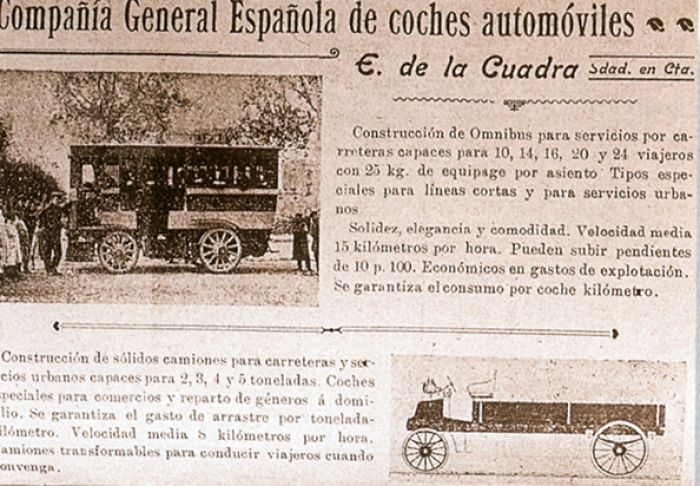 Share http://www.historiasdelcoche.com
In the historical documents of the Spanish company Hispano-Suiza the information was found, that the first electric bus of the antecedent company Emilio de la Cuadra, presented in Barcelona in 1899/1900, did not work satisfactorily, despite the fact that three Swiss experts tried everything. A recently found publication, a Barcelona newspaper of 1900, "La Dinastia", tells another story of the same subject. Somebody forgot something, or something was manipulated, later?

What more I delve into the history of electric vehicle, more contradictions I find. The last found object is really revealing:

"La Compañía General Española de Coches Automóviles has made an act yesterday that makes it worthy of the applause of the general public, since it causes the means of banishing the historic stagecoach in many places: it is the omnibus car, a superb carriage of magnificent construction, with three departments: the front for the driver, the sedan for six seats and the general box where ten passengers comfortably can sit. In addition to the sixteen passengers the car can carry up to 400 kilograms.The average speed is 22 kilometers per hour and the fluid consumption does not exceed 20 cents per kilometer.

This system is without a doubt the best: the electric accumulators go in two boxes placed in the lower part of the car and its mechanism can not be simpler or safer. The tests verified yesterday afternoon could not give more satisfactory result. The car went through the rounds to which it took two laps, deviating in one of them to pass through the boulevards, without the slightest incident occurring in spite of the crowds of cars, buses and trams."

Two month earlier, In August 1900, the bus was inaugurated in front of journalists and city officials. The first test drive was frustrating, the vehicle could not even climb a slight incline. In December, however, the situation completely different: the presentation of this electric bus in December was a complete success. But why was this success never included in the history of Spanish Hispano-Suiza? Let's be clear: Back then, three Swiss experts worked on the Spanish electric bus, the battery manufacturer Carl Vellino Bock - he owned a battery production plant in Barcelona -, his colleague Georges Bouvier and the young watchmaker Marc Birkigt (the later chief technology officer of Hispano-Suiza). In the documents of Hispano-Suiza is only handed down that Birkigt advised the company to invest no further forces in electric vehicles, better is a complete focus on gasoline vehicles.
TagsHistorias Del Coche