Invited by the SEADA, the Morón Air Base in Seville was the site of a historic event in which […] 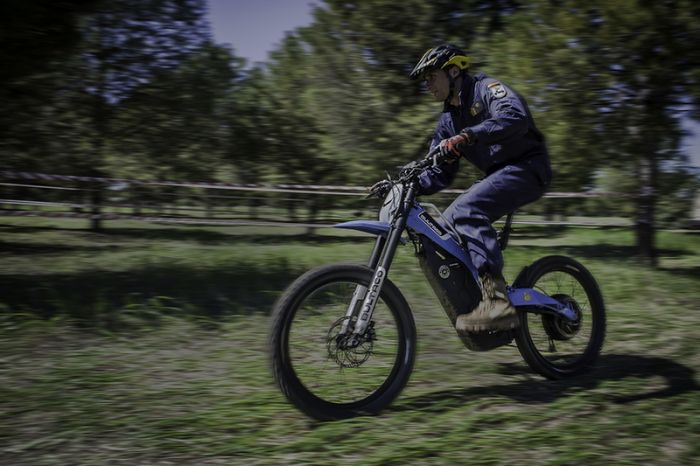 Share
Invited by the SEADA, the Morón Air Base in Seville was the site of a historic event in which representatives of more than 10 Armed Forces and Security Forces had the opportunity to ride existing Bultaco Brinco models, and prototypes

Personnel of the SEADA (Second Air Support Deployment Squadron), Emergency Military Unit (UME), Special Navy Operations (Special Naval Warfare Force), Army, Navy, Plus Ultra Royal Guard Squadron, National Police Force, Local Police, Mobile Air Control Group (GRUMOCA), Civil Guard of SEPRONA, staff at the Morón Air Base, and even representatives of the United States Air Force (USAF) and US Marines Corps converged on a historic day for Bultaco, on which they were able to check out and test the different versions of the Bultaco Brinco, including those of the Army line, of which the SEADA has already acquired some units, as well as the prototypes of future projects focused on Defence and Security.

After a theoretical explanation of the moto-bike concept and its potential uses, dynamic tests were carried out on a route on and around the Air Base so that the units could appreciate different situations that could be encountered during the performance of their activities and understand the Brinco's capacities and features. The different units participated in the exercises dressed in their respective uniforms, and two military professionals were even equipped as if on a real mission, with a vest and protective helmet.

The final feedback could not have been more positive, and at the end of the manoeuvres the participants and Bultaco technicians shared notes and impressions in order to analyse the vehicles and be able to offer the best product to satisfy the different needs of the different Security Forces.

Numerous comments were received following the tests, such as those of Commander Manuel García de Consuegra, at the Morón Air Base: "The Bultaco Brinco is something completely different, highly suitable as a response unit for base patrol and surveillance." "Personally, I would implement it in my city. I give it a 10," said the representative of the Local Police in Utrera. Similar impressions were conveyed by the SEPRONA sergeant of the Civil Guard: "I found it versatile and dynamic. I think it has potential. In addition, it does not pollute, which is something essential for us."

Jorge Bonilla, Vice-president of Sales and Marketing at Bultaco Motors stated: "When on May 17, 2014 Bultaco announced its official return to the market, the new team of professionals that make up Bultaco Motors expressed its commitment and duty to maintain the essence of the brand, a story that is all about values, people, innovative solutions and dreams that come true. Today, one of these dreams has become a reality: being NATO-approved suppliers confirms the reliability of the Bultaco Brinco and the technical capacity of Bultaco Motors as a supplier of special fleets intended for professional use".

Bultaco is the legendary motorcycle brand founded on May 17, 1958 by Paco Bultó.  Over the course of its history it has marketed legendary models like the Sherpa, Matador, Metralla and Frontera, and won countless Spanish and international championships, with renowned racers like Ángel Nieto, Jorge Martínez Aspar, Sammy Miller and Barry Sheene. The Bultaco of the 21st century is banking on the most advanced technology: its very own electric propulsion system, energy regeneration and storage solutions to achieve hitherto unknown battery duration, high-level components, and the use of ultra-lightweight materials. The new Bultaco Motors team upholds the Thumb-up brand's spirit, true to the traditional values that made the brand a legend: passion, innovation and competition. It has drawn inspiration from the names of its legendary motorcycles, and is proud of his heritage, but does not live in the past, always looking ahead.
TagsBultaco