The Swiss company Microlino, which has been developing one of the most spectacular electric city […] 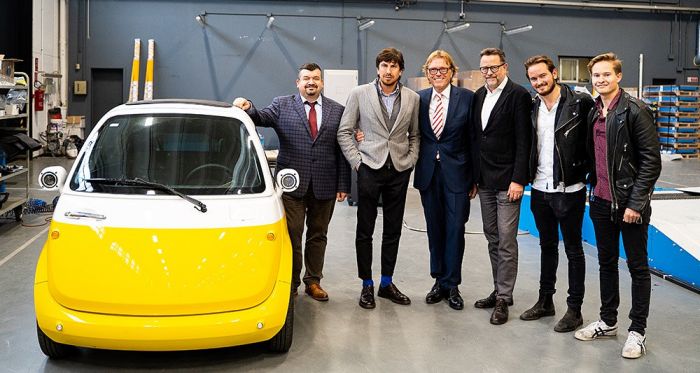 The swiss bubble-car Microlino will be built in Germany

Share
The Swiss company Microlino, which has been developing one of the most spectacular electric city cars for some time, has decided to accept a third important partner by the hands of the German company Artega, which will produce this model from January 2019 in a factory in Dellbrück. At the same time, Artega, who in turn has introduced an electric sports car, has taken the rights of Tazzari, an Italian manufacturer of electric city cars that are already known in several countries. The Microlino has an Isetta-style body, the bubble car par excellence of the 1960s, with entrance through a door in front.

What makes Artega special as a partner is not just their experience in manufacturing high-quality products, but also their ecosystem. Their CEO Klaus Frers is also owner of Paragon, a supplier to the automotive industry, listed on the German stock exchange. paragon has a range of products that fit perfectly into the ecosystem of the Microlino, such as displays, voice assistants, speakers and other interior parts. In addition, Paragon has a subsidiary called Voltabox, which is specialized in producing Li-ion batteries for forklifts and e-bikes. Sounds promising, right?

We will shift production from Imola to Dellbrück in the following weeks and expect only minor delays in our timeline. Yes, you heard right: we were preparing the relocation of the production for some months now, but had to keep quiet before the deal was finally closed. Sorry for that one! The Microlino will be manufactured in a 3,000 m² factory hall in Dellbrück-Hagen, starting from January 2019. The long-term, maximum production capacity is planned to be 8,000 vehicles per year with the first deliveries going out to Swiss customers in spring 2019.

Notice from Christian Manz: Remember the Microlino is 2.40 metres long, allowing it to be parked facing the street, weighs about 510 kg with its battery and has a 15 kW electric motor, which allows it to accelerate in five seconds from 0-50 km/h and reach a top speed of about 90 km/h.

The photos - courtesy of Microlino - show us the compact interior and the larger boot space. The last photo is the prototype of the electric sports car presented by Artega.