The Technical University of Aachen (Germany) is working on various electromobility projects; in the […] 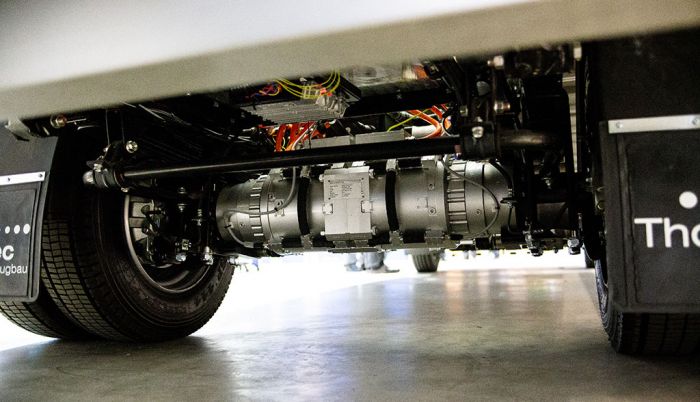 Share http://www.historiasdelcoche.com
The Technical University of Aachen (Germany) is working on various electromobility projects; in the so-called LiVe it investigates the reduction of life cycle costs of electric delivery vehicles through modular components.

The solution is an individually adaptable drive, a modular system, which can reduce costs and increase the range of different models and bodies. The first step was to dismantle the normal axle of a 7.5 ton Isuzu truck by replacing it with an electric motor-axle from the German supplier BPW.

Although there are not many details yet, the project seems to work, this Isuzu prototype now has an electric rear-wheel drive with a torque of about 6,500 NM, optimized batteries in their respective cabs, and electrified pumps such as power steering, cooling water and drainage pump. The RWTH Aachen University is working on four prototypes, two trucks of different purely electric tons, one equipped with a hydrogen fuel cell and another unit that will carry a pantograph to collect energy through an overhead power line.

The modular concept for creating electric vehicles is not a new idea, it has been applied since 1896, but it is a good idea, which deserves to be taken from history, adapting to the great technological possibilities of today.

In 1896 the so-called avant-train appeared in France, a front axle with two wheels, a motor, the corresponding batteries and the steering, a complete module that could be mounted on any horse carriage. Its inventor was the engineer Pretot, who transformed two closed carriages for six people into petrol-powered buses. The concept was to change the normal axle of the carriage for a module axle-engine-traction, converting any carriage into a vehicle. It was soon used to create electric vehicles.

The idea was to change the front axle completely, thus creating front-wheel drive vehicles, the great novelty at that time when almost all models had their rear-wheel drive, since the issue of the drive and steering axle at the same time had not yet been well resolved. In the case of the electric module, the entire axle was rotated.

The pioneers of this system were Georges Latil in France and Joseph Vollmer in Germany, since 1898, plus Eugenio Cantano from Rome in Italy, since 1900, who sold his licenses to France and the United States. The Italian FRAM electric system was built in France by deDion-Bouton and chosen in 1913 for the cleaning of the city of Paris, using more than one hundred units. This system won the competition against two gasoline engine modules submitted by the competition.

The driving and steering front axle, and at the same time electric, remained in production for many years. In Germany, special communal vehicles were created with this system, mainly for street cleaning, garbage collection etc., in use until the end of the thirties. The largest manufacturer was Hentschel, which finally merged with the new Berlin Elite company, which sold this modular system under the name "the electric horse".