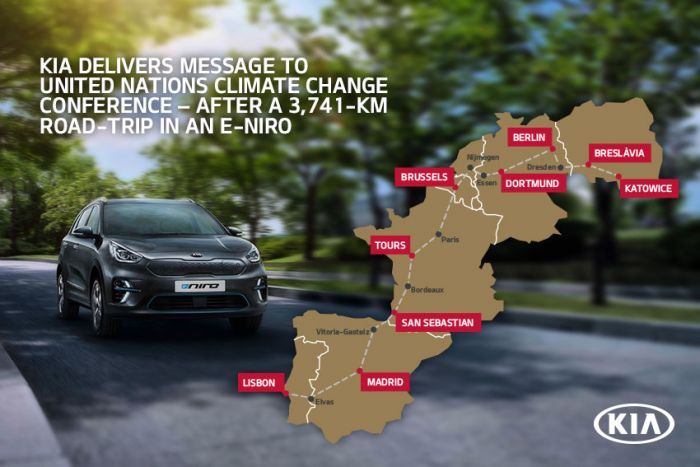 Share http://www.historiasdelcoche.com
An all-electric Kia e-Niro Crossover has completed a major 3,741-kilometre road trip from Lisboa to Katowice (Poland), delivering a message to delegates of the 24th United Nations Climate Change Conference (COP24) about the importance of transitioning to more sustainable forms of transport. 110 years earlier an American Fritchle made the surprising trip from Lincoln to New York (2,880 kilometers) in order to publicize the usefulness of electric cars.

The drive was completed by Get2C, a Portuguese organisation active in the area of climate change, energy and carbon markets, in partnership with Kia Motors and the Lisbon City Council. The initiative represented the start of Get2C’s ‘Cooler World’ initiative, a project focused on raising awareness of the potential for long-distance electric mobility – and potential reductions in emissions associated with it.

The e-Niro’s CO2 emissions were measured in real-time by the COP by Electric Car team. Its indirect CO2 emissions (associated with the production of electricity) totalled 154 kg – representing a 74% reduction in emissions compared to the same journey undertaken in an average vehicle powered by internal combustion engine. The car’s average electricity consumption was 17 kW/100 km, and its average speed was 71 kph. Over nine days, the car spent 54.5 hours being charged – 15 hours during the daytime and 39.5 hours during overnight stops.

The driver Luís Costa commented: “COP by Electric Car is an independent project that aims to raise public awareness of sustainability, particularly alerting people to the risks and challenges related to climate change. This journey fulfils this ambition by focusing on electric mobility, which will play a decisive role in decarbonisation. The e-Niro was easy, comfortable and enjoyable to drive – the biggest limitations we encountered along the way were related to the inadequate payment network and a lack of standardisation of plugs.”

Kia’s e-Niro offers a driving range of between 455 kilometres (282 miles) and 615 kilometres (382 miles) in the city, together with a 7-Year, 150,000-kilometre warranty, which also covers the battery pack and electric motor. The car is available with a long-range, high-capacity 64 kWh lithium-ion polymer battery, as well as a 39.2 kWh power pack, which offers drivers up to 289 km (179 miles) of zero-emissions motoring on a full charge. Plugged into a 100 kW fast charger, it takes only 42 minutes to recharge the e-Niro’s 64 kWh battery from 20% to 80%.

This unique journey is reminiscent of 111 years ago with an electric car in the United States. The chemist, innovator and entrepreneur Oliver Parker Fritchle challenged in September 1908 to other manufacturers that he would make a long journey of almost 3,000 kilometers between Lincoln in Nebraska and New York. His challenge had no takers, but he decided to go anyway.

He left on October 31, 1908 with a car of his brand, a Fritchle Victoria two-seater, to a trip that probably no one had made before. He tooks very few tools or spare parts, only the essentials, a recharging cable and battery grids, plus some sulfuric acid liquids and ammonia for the batteries.

The roads were very bad, rather dusty roads. As his driver says, near Pittsburgh he could recharge his car for free by helping to repare an electric system of a nickelodeon theater. In York, a strong policeman forced him to buy a Pennsylvania license plate to let him pass through the province, the same thing happened in New Jersey shortly after (it is clear that the regions were not used to travelling by car).

The Fritchle only had one flat concerning the brakes, burnt out descending the Allegheny Mountains; he rleined the brakes with camel hair. On November 28, Oliver Fritchle arrived in New York after traveling more than 1,800 miles (2,880 km); an incredible success for a car, and even more so for an electric car, the safest car at the time. It was also a very good advertisement for the brand, which was known outside its usual area. And demonstrating that even then it was possible to make long journeys in non-polluting and silent cars. There was no need to evolve towards noise and air pollution.