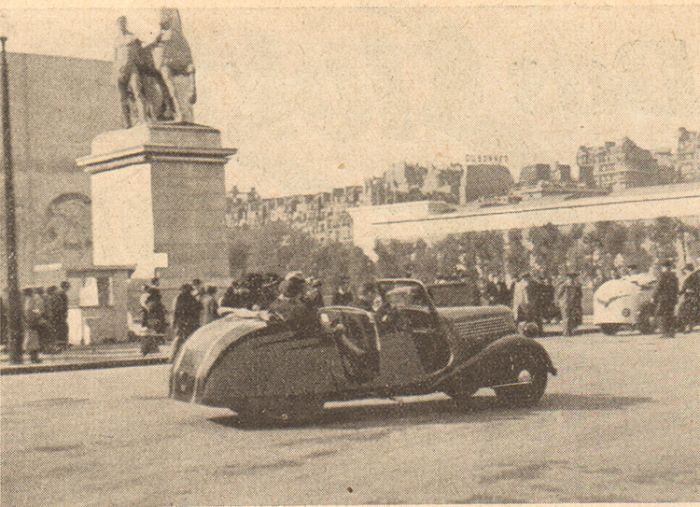 Share
An article published in 1937 in the German magazine "Das Elektrofahrzeug" (The Electric Vehicle) states that in 1937 the World Exposition of Paris - Exposition Internationale des Arts et Tecniques de Paris - all the vehicles for transport were electric. The Celtaquatre Electrique model presented at that time by Renault was used as a taxi. The exhibition was open from 25 May to 25 November 1937.

The International Art and Technology Exhibition in Paris, also known as the World Exhibition, had an international presence in spite of the harsh war events of the time. The exhibition sought above all to convey peace, and to make an appeal to maintain peace in all countries at a time when war bells were already ringing all over Europe. In this exhibition, the giant painting "Guernica" by Pablo Picasso, which spoke so clearly and harshly of wars, was exhibited for the first time in the Spanish pavilion. Picasso still worked on this huge painting in that time.

But let's go to the electric vehicles. Renault prepared its Celtaquatre model as a four-door convertible with an electric motor, in order to offer an adequate service between the different pavilions of the exhibition. There was enough space for four people. The engine provided 2.7 HP at 45 volts and 2,250 revolutions. The battery with a total weight of 600 kg was located under the front hood and in the luggage compartment. It had a capacity of 240 hours/amperes, with a five-speed transmission of 4, 5, 8, 10 and 15 km/h. It also had four-wheel brakes.

Another electric model was the small train that could carry up to six trailers with four seats each. It had a 9 HP engine at 80 volts and 2,000 revolutions, with batteries that gave a range of 60 kilometers.

The exhibition was a great success. It clearly demonstrated that the art and the technology of modern life can go hand in hand, and the pavilions and exhibitions of the 44 participating countries were visited by more than 31 million people.