On April 29, the Belgian Camille Jenatzy presented himself again on the track of […] 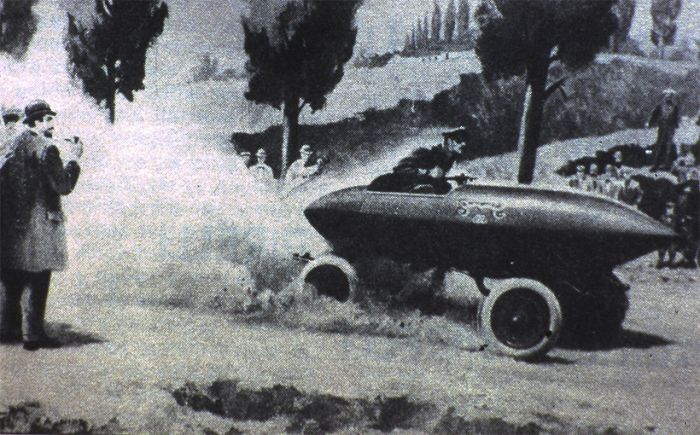 Share http://www.historiasdelcoche.com
On April 29, the Belgian Camille Jenatzy presented himself again on the track of Achères in France to beat the speed record in his car, the "Jamais Contente", a curious vehicle with a large cigarette silhouette, equipped with two electric motors from Postal-Vinay in the rear where they directly attacked the rear wheels. After checking the chronometers several times, the new record of 105.85 km/h was announced - the first time a vehicle passed 100 km/h. And it was an electric car!

We'll have to celebrate this record! It was the beginning of electric cars, one of its great achievements in those years, as the gasoline car took more than three years to reach this speed.

As commented in my book "The Pioneers", the so-called red diable, the Belgian Camille Jenatzy, named for his red beard, appeared on April 1, 1899 to beat the record, came out like an arrow on the Achères track near Paris, but the time controller was not yet ready, and nobody knew at what speed he was going.

Previously the Belgian had already faced several times with the French Count Gaston Chasseloup-Laubat, both wanted to be declared the fastest man in a car.

In 1895 the Frenchman Charles Jeantaud took part in the Paris-Bordeaux-Paris race behind the wheel of his electric car. He knew that his car had a range of about 60 kilometres, too little to complete the day; therefore he organised battery depots every 40-45 km, where his mechanics could change the empty batteries for fresh ones in just 10 minutes. He arrived triumphantly in Paris, a smash not achieved by all the participants. Three years later the Belgian Camille Jenatzy won with his electric car over all the competitors in the Hill Climb from Chanteloup, leaving the petrol cars stunned to beat them ten seconds ahead. A month later, Count Chasseloup-Laubat was the fastest man to reach 63.158 km/h (kilometre launched) in his Jeantaud electric vehicle. This event controlled by the magazine "La France Automobile" took place in the park of Achères, a few kilometers north of Paris.

From this moment on, the Belgian Jenatzy and the French Chasseloup-Laubat started to beat each other in road race duels, always at the same place and with same conditions. Both wanted to be the fastest man in the world driving a car. One time, the count won, driving Jeantaud electric cars, the other time, won the Belgian with his own vehicle reaching every time higher speeds. They exceeded the limit of 70 km/h, than 80 km/h... when they realized that the electric motors reached their limit. They saw themselves obliged to look for other solutions in order to make their cars faster. Jeantaud opted for smoother sheet steel, claded the subfloor of his car and developed a bodywork with a wedge-shaped front, coming closer to aerodynamical concepts which later started to be fashioned. With a car prepared like this, the count reached the 93,724 km/h in March 1899. The duel seemed to be won. But from Belgium Jenatzy sent a note that he will come to continue the battle.

He would arrive with a car ready to the absolute limit of those times by breaking the record of 100 km/h, a magical speed that no one recommended. Jenatzy arrived with his new model "La Jamais Contente" ("never satisfied"), which looked more like a cigar on wheels. It had two engines of 25kW each on the rear axle attached to the wheels and attacking directly without differential. Its body was very rounded and kept a surprise: to lighten its weight it has been made entirely of a mixture of aluminum called Partinium, very expensive, but very light and never used in a car before.

After this success, surprised and scared of the high speed reached, both opponents officially renounced to continue with the competition.