The emblematic company Bugatti, today part of the Volkswagen Group and therefore in […] 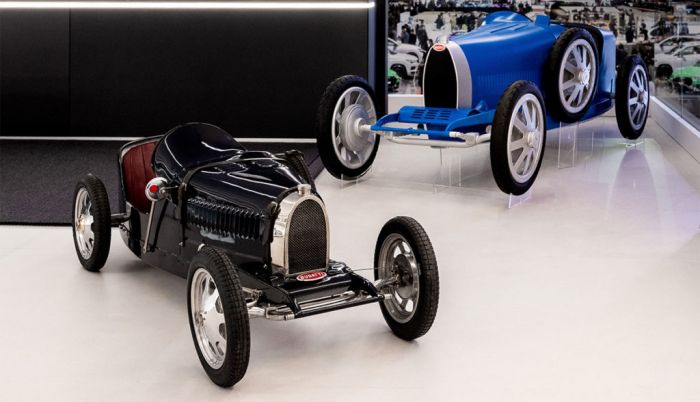 Bugatti Bébé II - coming back to an electric car concept

Share
The emblematic company Bugatti, today part of the Volkswagen Group and therefore in German hands, has presented its Bébé II, a replica of the legendary Type 35 Grand Prix in three-quarter size. With this model, Bugatti resumes its incursion into electric vehicles, since between 1927 and 1939 it produced a tiny Type 56 model for children - totally electric - and in 1931 the Type 56, another electric model at least so spacious that it could also be used for adults. Same as the new Bébé II.

Just like the original Baby, the Baby II has a rear-wheel-drive battery-powered electric powertrain. Unlike its predecessor, the Baby II features removable lithium-ion battery packs, a limited slip differential and even regenerative braking. The junior car will come with two selectable power modes for drivers of different statures: a 1kW ‘child mode’ with the top speed limited to 20 km/h, and a 4kW ‘adult mode’ with the top speed limited to 45 km/h. In addition, for those enthusiasts who crave even more pace, an optional ‘Speed Key’ upgrade is available (just like the Speed Key for its big brother, the Chiron!), which allows power of up to 10kW and disengages the speed limiter.

Both the interior and, for example, the rims are authentic reconstructions of the design that was already produced in 1924; the bodywork is painted in the race blue, chosen at that time by French racing vehicles. Prices are around €30,000 and production of the limited series of 500 units will begin in the autumn of this year. Reservations are already accepted.

While the Type 52, the Baby-Bugatti, debuted in 1927 to comply with the then practises of some manufacturers to produce a car for children (children from the high society), the Bugatti Type 56 was born in 1931 by necessity of the same Ettore Bugatti. He had bought a large castle to build his empire of metal, rubber and fuel, and needed a vehicle to cover the entire stay. What better to do it with a compact electric car.

Therefore, there were in history two electric models of Bugatti, and now the third, waiting for Bugatti to pronounce itself to produce a great actual car with electric motors, as do many other manufacturers. But nothing is yet known about this project.

The Type 52 for children had a 12-volt motor that reached 18 km/h and was manufactured in a series of between 90 and 110 units, of which there are still some alive today. To these must be added some units built later by the British company Crosthwaite & Gardiner, experts in replicas. But as some of its current owners, all of them adults, have confirmed, it is almost impossible to drive it themselves because of the limited space. It is also confirmed that there were at least a few models with a longer wheelbase.