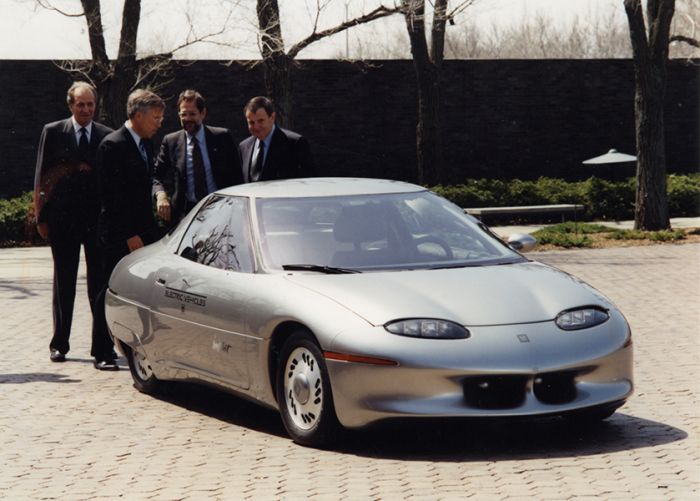 REFLECTIONS AND WORDS (2) for the Climate Summit

Share http://www.historiasdelcoche.com
"2% of total car sales in 1998 to be zero emissions vehicles”.

Concern for air quality became the electric car’s most favorate point of support. In 1989, the California Air Resources Board issued a notice of its intent to encourage and require lower-polluting forms of personal transportation. Anticipating this mandate, the City of Los Angeles had already adopted its EV Initiative on May 6, 1988, announcing a competition to support the production of 10.000 electric cars.


Public attention was also directed to alternative cars in March 1989 when the Exxon Valdez created the largest single oil spill in the world. Six months later, the California Air Resources Board (CARB) proposed mandates for 2% of total car sales in 1998 to be “zero emissions vehicles”.

In January 1990 General Motors unveiled a prototype two-seater called the “Impact”, aimed at the “performance car” market; in April 1991, GM announced it would convert a factory in Lansing, Michigan, to produce the Impact. (From “Why wait for Detroit”, edited by Steve Mc Crea).

In these days, demands have once again been presented to the State of America due to its lack of interest in adapting measures to curb climate change and the denial of realities by the great oil lobby and its related politicians.

The National Coalition for Advanced Transportation (NCAT), which includes Tesla, Rivian Automotive, ChargePoint, and several other EV-related companies, has filed a lawsuit against NHTSA:

NHTSA’s purported elimination of state authority through the Preemption Regulation adversely affects the marketplace for transportation electrification and deployment of advanced vehicle technologies across the country —undermining business opportunities for utilities, manufacturers, and infrastructure companies.

Tesla has often complained that California’s emission standards and ZEV mandate are actually too weak, but NHTSA’s effort would make them even weaker.

Photo: The General Motors Impact (EV1) could have been the starting point for a range of highly attractive electric vehicles.