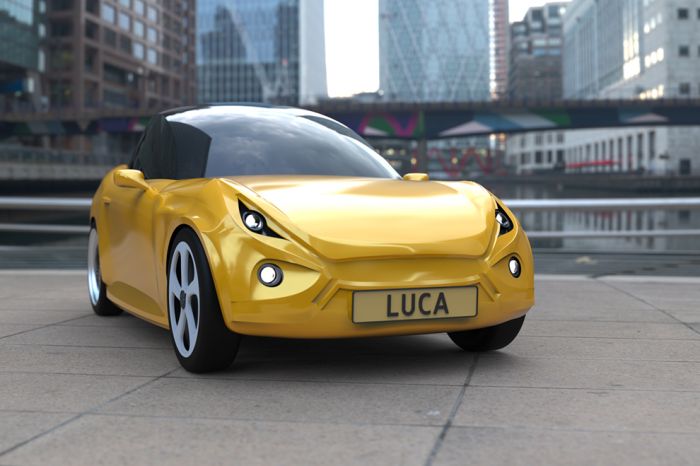 Share
Student Team TU/ecomotive from the Eindhoven University of Technology presented the design of their sixth car: Luca. With this car, the team wants to show that waste can also be a valuable material.

The team will implement as much material as possible, that normally would have been thrown away. For example, the chassis will be made out of flax, recycled PET and PP coming straight out of the ocean. Also, the body will feature a unique material: a kind of plastic made out of household waste. Luca will have room for two persons and is driven by two electric motors. These motors will be powered by modular battery packs. The car needs to be ready in the summer of 2020 for a promotion tour.

By now, there is a world population of 7.75 billion people and predictions say that this population will grow to 10 billion by 2050. All these people consume lots of resources, from which most is thrown away shortly after use. As a result humanity creates 2.1 billion tons of waste annually, enough to fill the Philips Stadium to the roof 7380 times. The World Bank expects that without urgent action, this amount will grow by 70% by 2050. This waste results in problems because worldwide, only a small amount of waste is either composted or recycled. Another part ends up in our rivers and oceans. It is predicted that by 2050 plastics will outweigh fish in the oceans. But by far most of our waste ends up in landfills. Fortunately these landfills are scarce in the western world, but eventually we will also have to deal with the consequences. These landfills namely contribute massively to the greenhouse effect: A fifth of the annual methane emissions come from this source. TU/ecomotive believes that waste that ends up in places like these can be used better. That is why the team does not see it as waste but as a valuable material that can still be used for many applications.

With Luca, TU/ecomotive wants to show that this is already possible. That is why the team wants to implement as much waste as possible in the car. This will be done by developing a bio-based composite, made out of flax and recycled plastic, that will be used in the chassis. The inside of this composite will be made out of recycled PET bottles. PET can be recycled approximately 10 times, so by using it in a car the team wans to extend the life-cycle of PET. The outside of the composite will be made out of flax in combination with recycled plastic coming straight out of the ocean. The front and the rear part of the chassis will be made out of a tube frame from recycled aluminium. This way, the team wants to find the ideal balance between strength, weight and sustainability. For the body, another material will be developed. This is done in collaboration with an Israeli start-up: UBQ. This company makes an additive for plastic out of household waste. This way, the team wants to stimulate that the amount of waste that ends up in landfills reduces. The material will be mixed with recycled PP. Luca will also be very efficient because in-wheel motors will be used. This mitigates a lot of losses in the drivetrain. The two electric motors will have a combined power of 15 kW and are powered by 6 modular battery packs. These can be replaced easily by full packs or even more modern batteries with new technology if this is available in the future.

When Luca is built, the team wants to obtain a license plate for the car. During the test, the car will be judged for reliability and safety. By making Luca road legal, the team wants to show that it is already possible to build realistic cars in a sustainable way. The coming months, TU/ecomotive will focus on the production of Luca. The car needs to be finished in June 2020. Afterwards, the team organizes an event to promote Luca and the vision of TU/ecomotive.