Our efforts have been primarily educational.  The Moto-Electra was built on a sheep farm in a barn […] 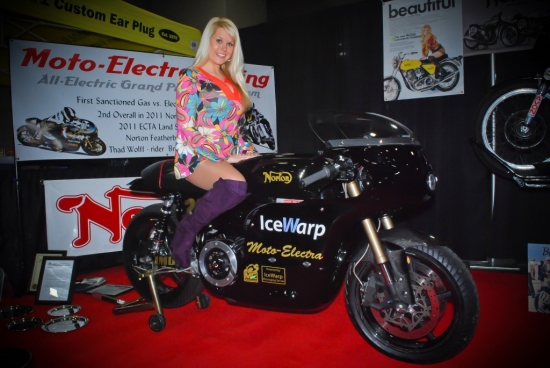 Share http://www.motoelectra.com
Our efforts have been primarily educational.  The Moto-Electra was built on a sheep farm in a barn in Blue Grass (Virginia). Our project has always been run on a very small budget (under 10K some years). But Moto-Electra has some very big plans for 2013.  We hope to set some interesting records this spring, and change perceptions regarding electric vehicles.  Unfortunately, we still need to find a sponsor or two.  Any thoughts would be much appreciated.

From its humble Moto Electra Racing has consistently been on the podium against factory teams with much larger budgets.  An incredible team has coalesced around the dream of country lawyer, Brian Richardson, allowing Moto Electra Racing to produce surprising results.

The team’s journey began in 2009 when Brian Richardson (with no background in motorcycle racing) decided he wanted to build a cafe racer…with a twist. The classic cafe racer is built around a Norton Featherbed frame, one of which was called a Norton Electra. Given Brian’s desire to build an electric race bike, a name like Electra jumped out at him.

Once he settled on the frame, he needed a motor that could “do the ton” (go over 100 mph) in order to be competitive. With no “golden age of electric vehicle racing” to look back to (we’re living it!), Brian had to go with what felt right. And feel right it did. After months of building the bike in his kitchen, barn and anywhere else his wife Betty would let him work on it, Brian had built the bike that would become known as the Moto Electra and would go on to achieve the following:

It is powered by an electric motor and lithium-polymer batteries, which results in zero emissions. On average, the street range of the bike is 80 miles. What’s unique about the Moto Electra is that it’s based on a 1950’s Norton Featherbed chassis.  We’ve found hidden virtue  in the 60 year old design.  The Moto Electra loses nothing to the modern chassis designs through the curves.  In fact, that’s where it shines!