With its HYbrid Air technology, Peugeot reaffirms its strategy of reducing fuel consumption and CO2 […] 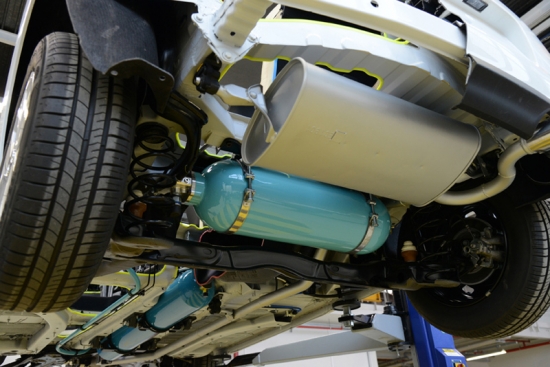 Share
With its HYbrid Air technology, Peugeot reaffirms its strategy of reducing fuel consumption and CO2 emissions and at the same time highlighting industry leading advances. Peugeot has set itself the goal of reducing the average CO2 emissions of its range to 116g/km by 2015 without sacrificing driving pleasure. To achieve this, it is investing in a range of technologies, some of which are already present on its vehicles and are allowing substantial progress: continuous improvement of the efficiency of the internal combustion engine, a petrol and diesel engine down-sizing strategy and widespread use of its Stop & Start technology.

This breakthrough technology is introduced on the 2008, the new urban crossover developed by and for three Continents. It is the natural vehicle for this new drivetrain, which combines petrol and compressed air to fulfil the expectations of customers and rises to the increasing challenges of the motor industry.

The specification for this technology sets clear objectives: substantial reduction of fuel consumption and CO2 emissions, by means of affordable technology which can be applied to cars and light commercial vehicles in the B and C segments. In response to this, the HYbrid Air combines tried and tested technology with the new generation of 3-cylinder petrol engines and compressed air. Over 80 patents testify to the expertise brought together for this important research and development work.

The HYbrid Air combines two energies to achieve the highest efficiency in various situations. So, the compressed air will assist, or even take the place of, the petrol engine during the phases which consume the most energy, i.e. acceleration and moving off. This technology uses certain components new to the motor industry but widely tested in other sectors such as aeronautics. The HYbrid Air consists of: an energy tank containing pressurised air installed under the body in the central tunnel, a low pressure tank at the rear suspension cross member acting as an expansion bottle and an hydraulic unit consisting of a motor and a pump installed under the bonnet on the transmission.

The latter consists of an EGC (Electronic Gearbox Control) drivetrain to manage the distribution between the two motors. It replaces the mechanical gearbox and in addition offers automated gear changes. The engine used in this application is the latest generation 3-cylinder petrol engine. It benefits from the very latest technology: optimisation of weight and compactness by means of maximum integration of components, a reduction of internal friction by means of the use of ‘Diamond Carbon’ coating, thermo-management and split-cooling for faster warm-up. So, the HYbrid Air has the important advantage of being compatible with existing platforms benefitting occupant space, modularity and the volume of the petrol tank, which remains unchanged.

The driver controls the two energy sources to achieve the highest overall efficiency possible in any given situation and switching between the three modes available is seamless for the driver. In the Air (ZEV) mode, only the energy contained in the compressed air tank will drive the vehicle. As it depressurises, the air occupies an increasing amount of space in the energy tank and so displaces a corresponding volume of oil.  This is an energy carrier which supplies the hydraulic motor coupled to the drivetrain. As the engine is switched off, the vehicle moves without consuming any fuel or emitting any CO2.  This mode especially comes into its own when driving in urban areas.

In Petrol mode, only the 1.2-litre VTi 3-cylinder petrol engine powers the vehicle. This engine benefits from the latest technology to offer, compared to the previous generation, a reduction in weight of 21kg, friction reduced by 30% and advanced thermo-management to reach the optimum operating temperature more quickly.  This mode is particularly suited to steady speeds on main roads and motorways.

In the Combined mode, the petrol engine and hydraulic motor operate simultaneously to move the vehicle in proportions adjusted according to the situation to achieve optimum fuel economy. Adaptable, the HYbrid Air can supply the hydraulic motor from two sources. While the quantity of energy contained in the pressurised air tank is sufficient to fulfil the driver's request, the hydraulic motor operates using this source. Then, if necessary, it can be supplied by the hydraulic pump directly.  This mode is intended in particular for the transitional phases in urban areas and on the open road (moving off, acceleration).

The energy tank is filled in two ways. On deceleration (on braking or releasing the accelerator), the speed is reduced not by application of the brake pads to the brake discs but by the resistance to the compression of the air in this accumulator. The alternative consists of filling by restarting the internal combustion engine; in this situation, some of the energy produced by the petrol engine is used to compress the air. In both cases, the maximum energy capacity of the pressurised accumulator is reached very quickly - in just ten seconds.

The adaptability of the HYbrid Air technology allows it to offer numerous advantages. By using tried and tested components, its durability makes it suited to a wide range of road conditions encountered across the world. Remarkably, this innovative technology has the potential to become the heart of the range as an International hybrid.  On the current generation of B segment vehicles, the HYbrid Air considerably reduces fuel consumption and CO2 emissions. In fact, following a homologation cycle test, a figure of 97.4mpg was achieved and CO2 levels of just 69g/km.

The HYbrid Air is a key step towards 140mpg in association with other technological advances. In fact, this record fuel consumption will be achievable with the contribution of the innovations relating to the petrol engine and the platform. Regarding the engine, the down-sizing strategy, the thermo-management and the combustion are important progress areas. The platform is the modular construction component at the heart of the design and manufacture of any new model. The use of lighter materials and innovative industrial processes permit significant reductions in weight.

Such an ingenious idea cannot result from a conventional development programme. So, the HYbrid Air technology is the result of a project which brought together 200 specialists. The expertise represented, from the development of a drivetrain to a strategic vision including customer research worked closely with key strategic suppliers, including Bosch. Finally, the HYbrid Air was developed in financial partnership with the ‘Investing in the Future Programme’ of the Ademe, the French Environment and Energy Management Agency.