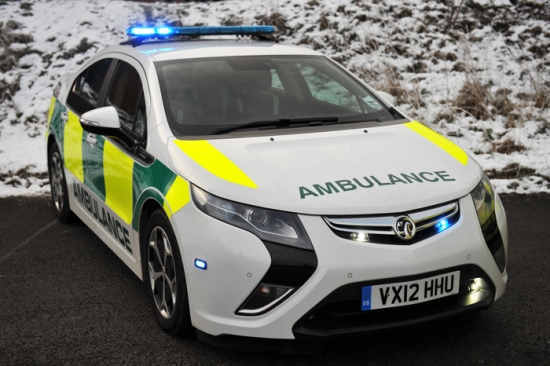 As part of the commitment to reducing its carbon emissions, Yorkshire Ambulance Service NHS Trust will be the first to trial a Vauxhall Ampera, the revolutionary extended-range electric vehicle, as part of its emergency fleet.

Over the next few months the Ampera will operate as a rapid response vehicle in the York area as part of the NHS Trust’s emergency fleet, to see how low carbon vehicles might be incorporated into the Trust’s fleet of more than 900 vehicles (emergency and Patient Transport Service).

Yorkshire Ambulance Service is committed to reducing its carbon footprint by 30% by 2015, as well as reducing its spending on fuel. The E-REV technology in the Ampera, which won European Car of the Year 2012, makes it a good option for use in the emergency services as it benefits from both an electric motor and a petrol engine – so there isn’t any concern about range anxiety.

The Vauxhall Ampera is the first electric vehicle to be trialled by an ambulance service on a long-term basis. “We are very excited to be the first ambulance service to trial an electric vehicle that will respond to incidents, reduce our emissions and provide significant savings on fuel costs.  As it has both electric and petrol power we are confident that it is a viable alternative,” commented Richard Smith, Fleet Manager for Yorkshire Ambulance Service.

City of York Council has agreed to support the trial by making plug-in electric charging points available across the city. Councillor Dave Merrett, Cabinet Member for Transport, Planning and Sustainability, said: “I very much welcome Yorkshire Ambulance Service’s move to introducing lower emission vehicles to its fleet. This is a first for the UK and an initiative I hope other emergency services will adopt.”

Dick Ellam, Manager, Vauxhall Special Vehicles, said: “We are delighted that the Ampera was chosen to be the first electric vehicle to be trialled as a frontline ambulance vehicle by the NHS Trust, and we are confident that the Yorkshire Ambulance Service will be impressed by the Ampera’s durability, performance and economy.”