Making its UK debut this september in the Salon Privé […] 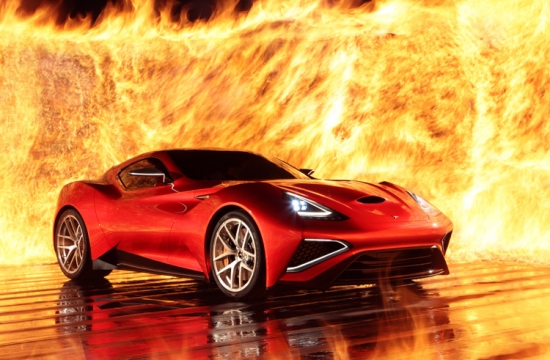 Share
Making its UK debut this september in the Salon Privé

Icona was established in 2010 and launched with an electric concept car the Fuselage, which was a finalist at the 27th Festival Automobile International in Paris in the World´s Most Beautiful Concept Car competition.

Icona has since developed the Vulcano, a glamorous two-door, two-seater super sport, which made its world premiere in Shanghai earlier this year.  Salon Privé will provide the first opportunity to see this V12 Hybrid one-off, ultra high performance car in the UK.   Reaching up to 950 hp, the Vulcano has a top speed as high as 350 km/h and a staggering acceleration of under 9 seconds for 0-120 mph.  The Vulcano was engineered by world famous former Scuderia Ferrari technical director Claudio Lombardi.

Sales Director, David Bagley commented: “Icona is a very exciting new brand and we are delighted that it has chosen Salon Privé for the UK debut of the Vulcano. It´s a beautiful car and it is going to look fantastic within the Concepts & Prototypes Display.”

Tickets for Salon Privé can be purchased at www.salonprivelondon.com or by calling the Ticket Hotline on 0808 100 2205.  Entry is fully inclusive of Pommery champagne, lobster luncheon, English afternoon tea and full access to all areas.

Approaching its eighth year in 2013, Salon Privé takes place from the 4th to 6th of September at West London´s Syon Park and is firmly established as the UK´s most prestigious Luxury Super Car Show & Concours d´Elégance.