Electric threewheelers for Asia from Japan […] 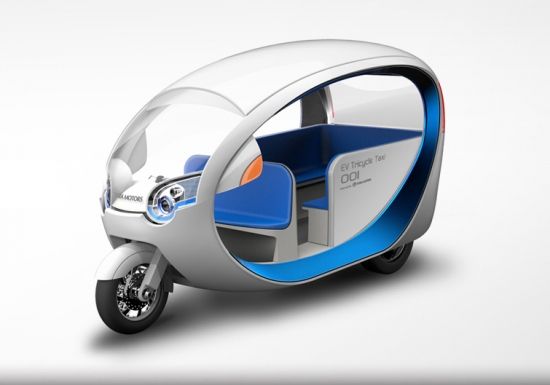 More than 80% of world sales for gasoline motorcycles is concentrating in the Asian region. Motorcycles have improved peoples´ lives as a convenient means of transportation. However, air pollution caused by exhausting gas from motorcycles have become serious problem. Many motorcycles and tricycles users cover their face with masks on the street. In Vietnam, there are 16,000 people who die from air pollution every year. The recent rise of gas price has not only hit the peoples´ lives hardly but also caused the government´s concern on the national security.

EV is the vehicle that is powered by battery, motor, and controller instead of internal combustion engine. Therefore, vehicle structure of electric scooter is much simpler than gasoline motorcycle counterparts. EV needs about one forth of gasoline vehicles. This simplicity makes the existing gasoline motorcycle manufacturers reluctant about entering the EV industry because they have many loyal sub-contractors of components and engine engineers. Although EV is normally considered to be technically simple, it requires advanced level of technology and expertise in manufacturing. Chinese electric motorcycles have become largely popular in many parts of Asian countries. However, they faced maintenance and part supply chain problems in addition to its product quality. Therefore, the reputation of electric motorcycle is still low. Japanese gasoline motorcycles dominate the market as a result. Terra Motors will make innovation the Asian market with EV with Japanese product quality and careful after-sales service.