The team had the crazy idea of crossing the continent, from sea to shining sea, as fast as possible. […] 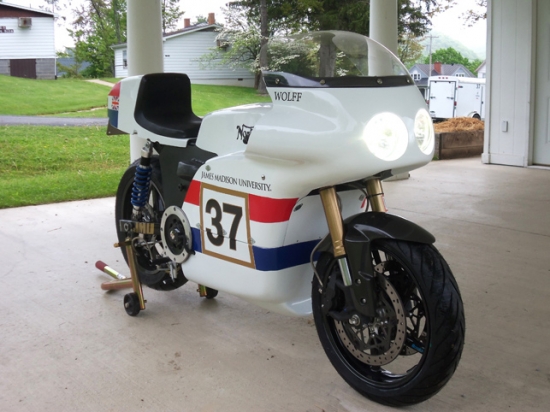 Moto Electra - from coast to coast

Share http://directorio.prestigeelectriccar.com/empresa-333-Moto_Electra
The team had the crazy idea of crossing the continent, from sea to shining sea, as fast as possible.

The idea came in 2012, the team had the crazy idea of crossing the continent, from sea to shining sea, as fast as possible.  The date was set for June 3, 2013 at dawn. There was only one rule for this modern day Cannonball Run:  The vehicle had to carry the batteries the entire way without swapping cells or trailering the bike. The race would be against the clock, and run 24 hours a day from dawn on June 3rd, until the team arrived at the Pacific Ocean.

The plan was to use a chase vehicle with a generator pulled by Highland County resident Lloyd Bird. Richardson pointed out that all races have support vehicles and a crew. The first trans-continental crossings by a gas powered cars used locomotives to deliver gas and parts ahead of the drivers. This effort was not intended to demonstrate the adequacy of the power grid for electric vehicles. In fact, it was just the opposite. Richardson only wanted one variable in the equation – the vehicle itself.

The first day of the trip, the team encountered heavy, monsoon rain in Florida. Actually, it was the rider; Thad Wolff who experienced the rain while the rest of the team sat comfortably in the chase vehicle. Thad asked if the bike could electrocute him – the answer, apparently not.  Another lesson learned.

After the rain it got hot – very hot.  Still no issues for the bike, but the heat took its toll on the team. Charging stops were very unpleasant in the desert. Fortunately, all of the equipment worked better than expected. Two days in, and it was finally time to get a hotel room and have a shower. Brian knew these hours were coming off the record, but he weighed the extra time against a possible mutiny.

In contrast to the heat was the cool desert air at night. It was a welcome relief. Riding silently across the desert at dawn was very enjoyable, and a highlight for the rider. Actually the first hint of trouble didn’t come until 20 miles from the finish. The bike began cutting out intermittently in Los Angles traffic. A quick pit stop, and the team pressed on to the finish. A bad throttle rheostat was blamed for the fault.

On June 6, 2013, Moto-Electra LLC set a coast-to-coast world record for electric vehicles by crossing the United States in 3.5 days (84.5 hours). There was no battery swapping, and the vehicle made the entire trip under its own power. The bike rode out onto the pier.