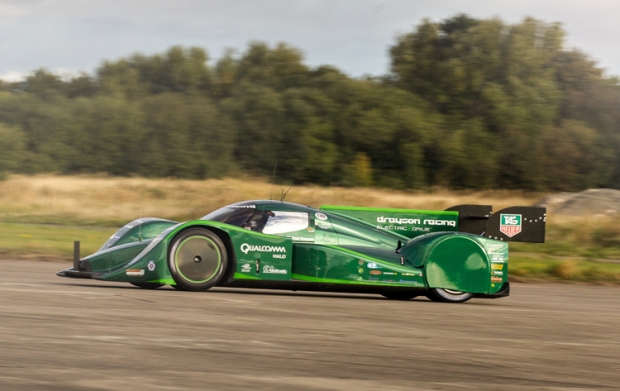 The all-electric prototype racing car driven by Lord (Paul) Drayson and developed by Drayson Racing Technologies achieved a two-way average speed of 205.139mph over the measured mile and 333.271kph over the measured kilometre  (*subject to FIA homologation) on the 3km long Elvington runway. The car reached an unofficial maximum speed of 219.1mph / 352.6kph during the runs in difficult, windy conditions according to GPS data.

This speed also represents a new British Land Speed Record (*subject to MSA ratification) over the measured mile for cars of any propulsion type driven by their wheels.

In addition, the Drayson Racing team submitted the car to FIA-sanctioned timed acceleration runs, setting a new World Electric Record from a standing start over a quarter mile with a time of 9.742 seconds and a top speed of 92.383mph (*subject to FIA homologation).

On the new record attempts, Lord Drayson (CEO) commented: “We are continuing the testing and development programme of our electric drivetrain technology and we are delighted with the results achieved today. Drayson Racing is a laboratory for novel EV technology such as the high power Qualcomm Halo wireless charging system, testing it to the most extreme level and that´s why we do this.  The engineering challenge of accelerating a 995kg electric car to these speeds and then stopping in time on such a short runway is pretty intense, but it´s a great proving ground for our technology. It´s also an exciting way of demonstrating what´s possible with a state of the art electric vehicle.”

The team returned to Elvington in an effort to take the prototype electric racing car even faster than before. When the Drayson Racing team last ran the car in June, it was still accelerating hard at the braking point on the runway. Analysis revealed that performance gains could be found in the car´s DRT 4X2 640 all electric drivetrain developed by Drayson Racing Technologies, so the team spent the summer refining the system. Chassis partner Multimatic has also made further aerodynamic adjustments to reduce drag and further increase the car´s performance potential.

Lord Drayson intended to discover the car´s maximum possible speed on the 15-mile long track at the Bonneville Salt Flats, Utah, USA last month, but did not get the opportunity after the event was cancelled due to flooding. With the development work on the car complete, the team decided to run again at Elvington to find out how much faster the car could go within the relatively tight confines of the 3km runway.